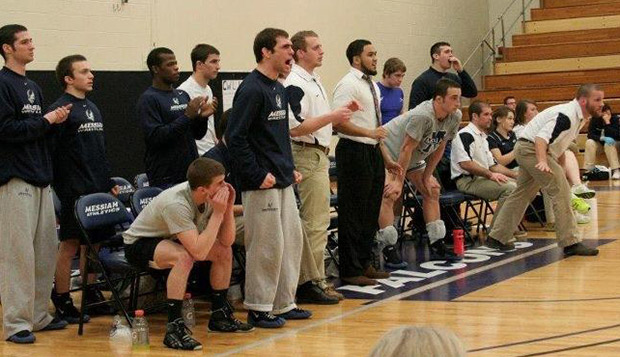 "He's a good wrestler with good accolades," Castro said of Williamson, who graduated from Messiah in May with a degree in Christian ministries and will pursue an M.B.A. at Liberty starting this fall. "He worked at a Messiah wrestling camp and I was impressed with him."

Liberty wrestlers finished runner-up against Williamson and his Falcon teammates at the season-opening Messiah Invitational on Nov. 1 before returning to Grantham, Pa., for the Messiah Open on Feb. 7.

"I had a couple other job offers lined up, but I wasn't sold on giving up wrestling just yet," said Williamson, who went 21-5 wrestling at 149 pounds in a senior season in which he dislocated a kneecap and suffered nerve damage in his neck. "I knew if a coaching opportunity came up, that would be really hard to pass up. I'm still in great shape and can still practice with the guys and I look forward to building friendships and mentoring wrestlers in the Christian faith."

Williamson plans to stay in contact with outgoing graduate assistant Miguel Rodriguez over the summer to help with his transition to the position, which he will officially start Aug. 1.

"I'll be helping out coach Castro with whatever he needs — in recruiting, training, and practicing in the room every day," Williamson said. "It is easy to recruit for Liberty. You can't go wrong wrestling for Liberty, which is part of the reason I wanted to work there."

He is excited to get started with workouts in the Wiseman Wrestling Room and to form relationships with the returning and incoming Flames during their third annual preseason Jacob's Challenge.

"Wrestling and faith are very much related," Williamson said. "It is the sport closest to mirroring the spiritual life, illustrated in Genesis 32, where Jacob wrestles with the angel of the Lord. You have to wrestle with God, always trying to get that blessing and to get better every day. In wrestling, if you're not getting better, you're getting worse every day. The same is exactly true in your spiritual life. If you're not moving closer to the Lord, you may as well be moving backwards."

He realizes the position will involve as much spiritual counseling and discipleship as psychological training and physical conditioning on the mat. That could be especially true with the number of newcomers to the team this season after several starters from last year's squad graduated or moved on.

"We have a really big group of new guys coming in who vary widely in their faith," Williamson said. "We're not entirely sure of what we've got our hands on now, but it doesn't take long to grow a pretty good bond, a brotherhood almost, after wrestling someone and going through experiences (like Jacob's Challenge) together, whether you're a Christian or not."

Williamson has plenty of experience in missions work, traveling to the Dominican Republic with the Falcons following his freshman year at Messiah and Uganda for two weeks last summer after traveling with his home church in Maryland to Bogota, Columbia. This summer, he will serve as the head speaker and a counselor at a Christian summer camp in West Milton, Ohio.

"I see myself going into full-time ministry or missions, in a pastoral role," he said, noting he may explore other options after completing his M.B.A.

He is eager to help Liberty defend its national championships, but keeps such trophies in proper perspective rather than letting them become idols.

"At Messiah, an NCAA Division III school, we were pretty sure we were going to win a national championship," said Williamson, whose Falcons wound up sixth at NCAA DIII nationals after defending their Mideast Region tournament crown. "At the start of the season, two or three of us senior captains got together and talked about it and said, ‘If we win a national championship and no one is impacted for Christ, what have we accomplished?' If we have one or two guys deepen their relationship with Christ, then it's all worthwhile."