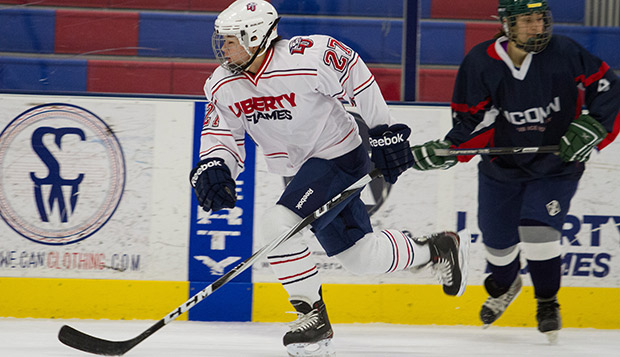 After competing for four years in the DVCHC, that was Liberty's last action in the non-ACHA conference, which it is dropping out of next season to join College Hockey East (CHE).

"We are looking to play more ACHA games this year, and the DVCHC did not offer many ACHA teams," Lady Flames Head Coach Sara Niemi said. "I was contacted by the representative of the CHE to see if we were interested in joining the women's Division II side of the league."

The league will expand from three to six teams with the addition of Liberty, Delaware, and the Naval Academy, which is dropping down from ACHA Division I to DII this season.

"Liberty, Delaware, and Navy joined at the same time to make the league bigger and better," Niemi said.

Buffalo, California of Pennsylvania, and West Chester are the conference's returning teams. All three advanced to the ACHA DII National Championships, March 4-8 in York, Pa.

"Joining the CHE will increase our competition this season and will help continue to develop our players by playing some of the best teams in the ACHA," Niemi said. "West Chester was national runner-up this past season and Cal-Penn was ranked No. 1 in the East going into nationals. I am looking forward to playing some new teams and also being able to make new connections and contacts for the future."

The champion of the CHE tournament receives an automatic bid to ACHA DII nationals as one of the top four ranked teams in the East Region. Last year, the Lady Flames (4-15-1) finished ranked sixth out of 10 teams in the region, based on their strength of schedule.

Next season, Liberty's schedule will feature between 10 and 15 games, all against ACHA DII teams, including a series against Montclair State (N.J.), the team it swept at home Nov. 8-9 to end a three-season losing skid.

The Lady Flames had 13 players on their roster in 2014-15 and are hoping to have as many this fall after graduating defensemen Shellman and Kaitlyn Scales and forwards Jenna Holman, and Alëna Steiger. They also lose graduate assistant and former defenseman Rena Leone.

Tryouts will be scheduled for the first week of the fall semester, Aug. 24-28, when the rink will be ready for use following the summer renovation and expansion of the LaHaye Ice Center.

"That's going to be super exciting," Niemi said. "We'll probably get more recruits in just because of the facilities we'll be able to offer."