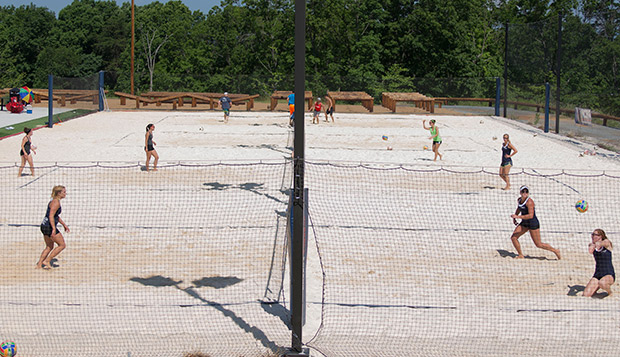 "I'm thankful to play with a partner who's so fast and quick," Fawcett said of Brooks, a rising junior. "He's really developing his skill to be able to read a shot, which helps him to get to most balls and really pick up the defense. Offensively, the strategy was to really swing at balls and use our power. We tried to force it to Mike because he was cramping up, and keep it away from Carlos, who jumps through the roof and has a very powerful swing."

Tyree and Mulcahy entered the playoffs as the No. 1 seed after the two teams split in pool play

"We beat them 21-17 and they beat us 21-16 in pool play," Horne said. "This season, it's been really close. They've gotten a lot better. They're our biggest competition on our team."

"Every game was pretty close," Mulcahy added. "We make each other really work to come out on top, point by point. We were trying to work them to the corners, but they were getting to everything. They're a really good team."

In the semifinal round, Mulcahy and Tyree eliminated the Lady Flames' tandem of rising junior Caroline Bertholino and outgoing senior Carly Lagerquist in two games while Johnson and Horne defeated an area duo. Meanwhile, in the men's semis, Fawcett and Brooks defeated outgoing senior Ryan Burtt and rising junior Mike Ragan while Rodriguez and Morrison, seeded third, upset the second-seeded senior pair of Ethan Chase and Kaleb VanDePerre. Chase and VanDePerre are the closest competitors to Fawcett and Brooks for the team's lone nationals bid.

"It's going to come down to the wire," Fawcett said. "We've placed second in two other tournaments where they've placed first and on Memorial Day, we won our Beach League by winning the final against Ethan and Kaleb."

That was the culmination of a Monday night league Liberty held in the month of May, which attracted nearly twice as many participants as last year. However, not enough players registered to keep that league going for this month, when the Flames will host a summer camp from June 6-8.

"It was a good tournament," Liberty Head Coach Rachel Willis said of Saturday's event. "We were not playing a lot of people outside of us, but we played a lot of volleyball and got more games in less time than we would have playing in a bigger tournament."

Such could be the case for this weekend's Tidewater Volleyball Association (TVA) Big Money Tournament in Virginia Beach, where the Flames and Lady Flames will enter teams in the open division for the first time.

"Usually we play in Class AA, but we feel that we're ready to step up to the next level, the next tier of beach volleyball," Fawcett said. "We'll potentially be playing against some professional players that play on the AVP tour and tours out in California. It will be a great learning opportunity and we're excited and pumped to be able to do it."