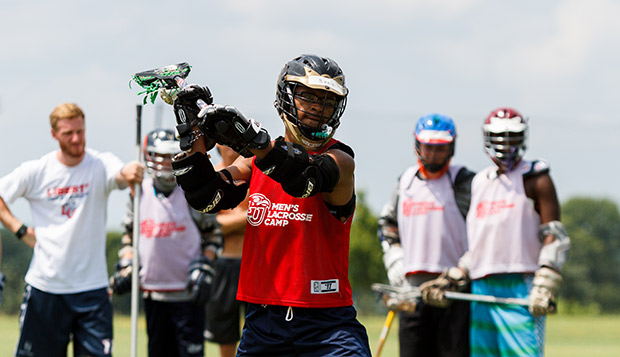 A player launches a shot on goal under supervision from Flames Assistant Coach Mike Zumpano during last year's camp.

"Last year was a good opportunity to get the camp off the ground and learn how to run the camp effectively and efficiently," Liberty Assistant Coach Mike Zumpano said. "This year, we wanted to grow in numbers and improve our ability to work with bigger groups, expose campers to a higher level of competition and coaching, and get more kids familiar with our program and the university."

More than 40 have registered so far, mostly from Virginia, North Carolina, and Pennsylvania, with others coming from as far away as Florida and Connecticut. Liberty advertised the camp more in the Roanoke and Richmond areas this year and expects a larger turnout from those nearby cities as well as Northern Virginia.

Registration costs — which include meals at Reber-Thomas Dining Hall, use of the locker rooms and other facilities in the lacrosse complex, and housing in an East Campus dormitory — range from $275 for day campers (8 a.m. to 5:30 p.m.) to $550 for overnight campers. Check-in for overnight campers is set for noon to 6 p.m. on Sunday, June 21.

"We plan to break it up according to skill level and age," Zumpano said, noting several in the 15-17-year-old range are using the week as a recruitment camp. "We've opened up the camp to prospective players who would be coming in to play in the fall, to allow them to come on campus, get more familiar with the program, showcase themselves, and get feedback from the coaching staff."

Most of the 14-and-younger participants will focus primarily on improving their games to prepare for playing on their travel clubs and high school teams.

"The bigger portion of campers will be kids coming to get better and play during the offseason," Zumpano said, "high school kids looking to learn from experienced college players and coaches."

"We will do a lot of fundamentals teaching early in the week, drills to give the kids opportunities to develop skills," Zumpano said. "On Friday, we will have a counselor vs. camper scrimmage to give the campers a chance to use their new skills against the counselors that have been teaching them, and a skills competition to give away prizes for fastest shot and accuracy."

Activities on campus will include afternoon trips to the Thomas Indoor Soccer Center to play soccer and the LaHaye Student Union to use its pool and rock climbing wall as well as evening outings to the Liberty Mountain Snowflex Centre and David's Place to give the campers a chance to unwind.