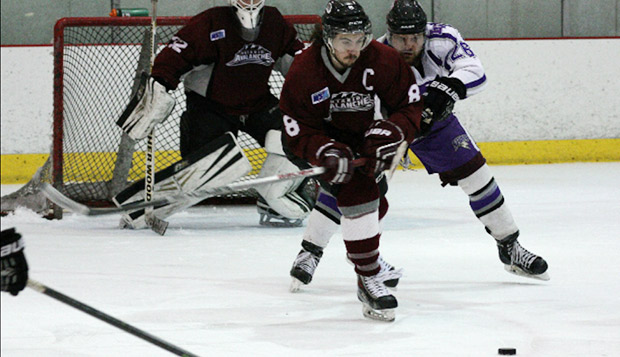 Jackson Giammona, a crisp-passing, hard-nosed defenseman, distributed 44 assists over the past three seasons with the Ontario (Calif.) Avalanche, including 22 in 2014-15.

Third-year Ontario (Calif.) Avalanche Junior "A" defenseman and head captain Jackson Giammona said he and Avalanche teammate Zechariah Roberts, who both committed this week to play for Liberty University's ACHA Division I men's hockey team starting this fall, form a dynamic duo on the ice.

They've been playing together for the past five seasons — the first two with the Orange County Hockey Club's U16 and U18 Midgets — and look forward to four more with the Flames.

"We definitely work well together," said Giammona, who's 5-feet, 11-inches tall and weighs 185 pounds. "He's a little more of a speed and skill guy and I'm a little more of a physical, hold-down-our-end and keep-the-puck-out-of-the-net guy. We make a good one-two punch."

He describes himself as a "hard-nosed, crisp-passing defenseman with a little offensive twist."

After participating in the Team FCA event in Buffalo, N.Y., last summer, where he connected with FCA Hockey National Director Rick Randazzo, Giammona made a positive first impression on Liberty's coaching staff at the Flames' Hockey Recruitment Camp over College For A Weekend in April.

"That was the first time they saw me," he said, noting they liked his solid defense and competitive drive.

The Long Beach, Calif., native plans to major in Exercise Science or Sport Management at Liberty, which is a long way from Southern California.

Like Roberts and fellow California recruit Ray Wilson, Giammona grew up playing roller hockey, starting at the age of 4, before switching to the ice at 11 and playing his first season of club-level hockey at 16. Besides those two Western States Hockey League players, he is also friends with Flames sophomore forward Luke Simon, another player with FCA ties.

"That's a great connection for us and one that we value, the relationship with Rick (Randazzo)," Flames Head Coach Kirk Handy said, noting Flames outgoing Assistant Coach Jake Hannon saw Giammona and Roberts play in Buffalo, N.Y., as well. "Both are guys who will be good, solid fits here at Liberty."