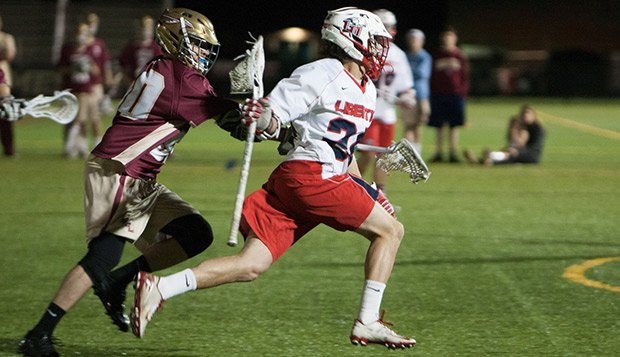 Junior midfielder Brett Bernardo was the Flames' leading scorer with 69 points, one more than junior attack Ryan Miller, including a team-high 45 goals.

Junior midfielder Brett Bernardo, the leading scorer on Liberty University's men's lacrosse team this past season, was the Flames' first player to be named as a first-team Men's Collegiate Lacrosse Association (MCLA) Division I All-American, announced at the national championships earlier this month in Orange County, Calif.

Bernardo, who transferred from NCAA Division I Marist College before last season, was also selected as the Corey Noonan Offensive MVP in the SouthEastern Lacrosse Conference and as Liberty's team MVP.

"Last year, he came in and did a lot of things to help us grow as a program," Flames Head Coach Kyle McQuillan said. "He invested time and sweat and blood and felt he could have a larger role this year and he definitely lived up to that. He's a really vocal leader on and off the field. He played with a lot more enthusiasm and had a lot more fun."

"His stats and success this season were amazing," McQuillan said. "Ryan Miller had a great season as well. The reason Brett stood out was he did this as a midfielder rather than as an attack. He's definitely a true middie, who plays both sides of the ball very well."

"He has the potential to have an even better year next year, when we'll have our largest graduating class, including the entire starting midfield line," McQuillan said.

Bernardo is spending the summer before his senior season involved in Fellowship of Christian Athletes (FCA) lacrosse camps before traveling to play in a tournament in Colorado.