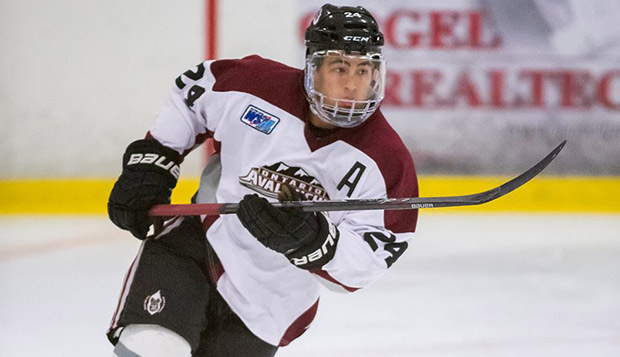 Zechariah Roberts was the third-leading scorer and MVP of the Ontario (Calif.) Avalanche last season.

Growing up in Southern California, he picked up roller hockey as a youth before transitioning to travel league ice hockey at the age of 12, eventually choosing it over baseball as a junior in high school.

At 5-feet, 9-inches tall, 155 pounds, Roberts, 21, is a diminutive forward, blessed with exceptional speed and stick skills. He plans to bulk up over the summer to prepare for his first season of collegiate hockey.

"I don't think it will be a huge adjustment," said Roberts, who served as an assistant captain under Avalanche defenseman and fellow Flames recruit Jackson Giammona, a five-year teammate. "Liberty (strength and conditioning coach Chris Kerr just sent over a workout (regimen) to Jackson and I and we're going to get with an ECHL trainer and get in some edge work on the ice. I want to gain 8-10 pounds to get to about 165 and keep my speed or become a step faster."

"I'm sort of a Swiss Army knife," he said. "I can do it all. I put up a lot of points last year and can play an offensive role, but I'm more of a two-way forward. I can do whatever the coaches need me to do."

Roberts is excited about remaining teammates with Giammona, who he calls "a big physical presence on the ice," and reuniting with FCA teammates Garvin and Simon.

He is also looking forward to playing with fellow Flames recruit and former Valencia (Calif.) Flyers forward Ray Wilson, another player with FCA connections, who scored the game-winning goal in overtime in the semifinals of this year's WSHL playoffs.

"I've grown up playing against Ray since I was 12," Roberts said. "It's more fun playing with him than against him, for sure."

Perhaps, he is most eager to take the ice at Liberty in the expanded LaHaye Ice Center, currently under renovation.

"It's going to be crazy," said Roberts, noting the small rink in Ontario, Calif., where the Avalanche play only draws around 100 spectators per contest. "I'm looking forward to all of that. It'll be a different atmosphere, which is what I'm looking forward to as far as the Christian aspect of it. It's great that you can play a very high level of hockey and at the same time grow spiritually."