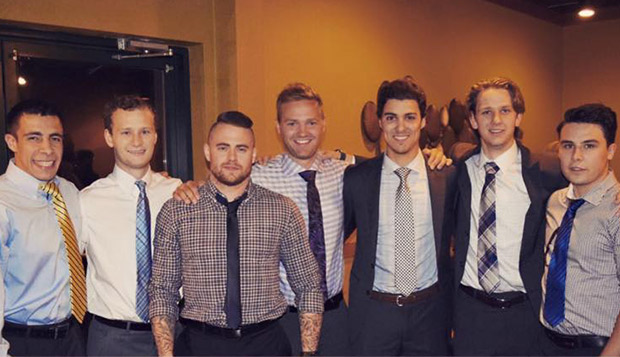 Liberty University's ACHA Division I men's hockey team, which advanced to its eighth ACHA National Championships in nine seasons this past March, held its awards banquet this week, honoring players who stood out in a variety of ways on and off the ice.

Assistant Coach Jake Hannon had the honor of awarding his younger brother, freshman Luke Hannon, as the Flames' Rookie of the Year and Forward of the Year plaques after he led the ACHA in scoring with 75 points. DI Head Coach Kirk Handy gave out the awards for Most Improved Player to sophomore defenseman Chase Harris and Hardest Worker to senior forward Lindsey LeBlanc, who paced the ACHA with 50 assists.

Flames Associate Head Coach Jeff Boettger then called LeBlanc back up to hand him the Most Valuable Player honor and gave senior Cam Bakker the Defenseman of the Year award. He also handed out Academic All-American recognition to three Flames — senior Ian Harris and first-year graduate students Matt Sherry and Peter Shantz.