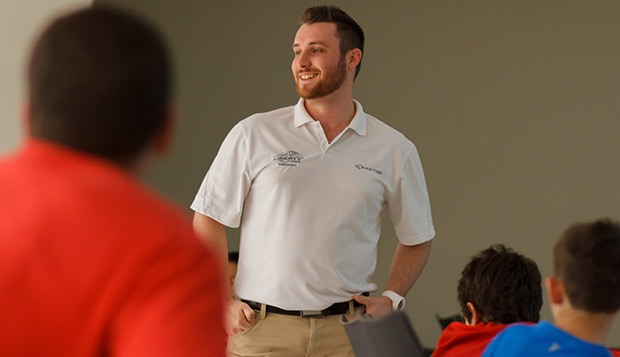 Jake Hannon will take many of the same teaching tools he incorporated during youth hockey camps at Liberty last summer into Buffalo-area schools.

An intensive four-year cycle with Liberty University's ACHA Division I men's hockey team — first as a player, then as team chaplain, and finally assistant coach — has equipped Jake Hannon to go into one of the more challenging mission fields in America, his hometown of Buffalo, N.Y.

"Both my wife and I are from Buffalo and in the last few months, God put a vision in our hearts to see that whole area reached with the Gospel," Hannon said, noting Buffalo has the smallest percentage of church-going Christians in the United States. "God spoke to us directly about it at Christmastime and it's been prophesied to us and over us that there's going to be a huge revival in Buffalo and that region of western New York is going to be known across the nation as a place where God has done a massive work. There's going to be a lot of churches and ministries involved in what God is doing and we really feel like He's calling us to go and be a part of it."

After playing four years of Junior "A" hockey and falling away from his faith during his freshman year at the United States Military Academy, an NCAA Division I program in West Point, N.Y., and sophomore and junior seasons at NCAA DIII Amherst (Mass.) College, Hannon was radically saved and transferred to Liberty before his senior year in 2011.

"God called me and commissioned me at the same time," said Hannon, who graduated with a B.S. in Religious Studies and is pursuing a Master of Divinity. "My reason for coming to Liberty four years ago was to learn about the Bible. I had lived in so many lies and I hungered to know the truth."

He met his future wife, Rebecca, the same summer he came to know the Lord.

"My wife and I met during a week-long outreach doing the exact thing we feel called to do, serving the inner city of Buffalo," Hannon said. "We were fixing houses, giving out food, helping kids, and it was not a coincidence. Got told us we were to get married to do ministry together."

They were married the summer after Hannon graduated in 2012 and moved to Lynchburg to start a family. (They have two children — Grace, 2, and Daniel, 1, and are expecting a third in July).

Hannon reached out to share his vision with Rick Randazzo, the Fellowship of Christian Athletes (FCA) national director for hockey who has helped recruit a handful of players to Liberty, including Ray Wilson, a center from Los Angeles, this spring. Hannon worked with Randazzo at a Team FCA camp in Buffalo and a tournament in Boston last summer, where he helped secure commitments from freshman goalie Josh Halpenny and forward Luke Simon.

"Jake called and told me the Lord was leading him to move to Buffalo," said Randazzo, who, like Hannon, grew up skating on Buffalo's frozen ponds and played hockey collegiately at Army, before going on to coach the ACHA DI team at the Naval Academy from 1999-2007. "When the Spirit calls, how awesome it is when we answer that."

A few days later, the New York area representative called him back and offered him a job representing the Buffalo area.

With FCA, Hannon will help to build an organization of volunteers that can impact student-athletes around Buffalo at the middle school, high school, and college levels.

"FCA has been laying the groundwork (in Buffalo)," Randazzo said. "Now it's ready to explode and I think Jake is really the person who can help explode FCA in the Buffalo area."

He believes Hannon is a perfect fit for the task at hand.

"He's got a servant's heart, he really has, to just impact guys, to disciple guys, to reach coaches," Randazzo said. "Those are the things he's going to be doing through FCA. It's really not about FCA, it's about Jesus. FCA is going to be the tool he uses to get into the schools and introduce students to Christ."

Liberty Head Coach Kirk Handy said Hannon is gifted at relational evangelism, which will be a vital skill in his new calling.

"Jake wants to love on people first and then build a relationship with them," Handy said. "Through building relationships and doing it the loving way, he also speaks truth into their lives."

Hannon will remain on the Club Sports staff at Liberty for the duration of the summer, as he and Rebecca raise support to start full-time at FCA in the fall. He will again be one of 12 coaches, including Flames Associate Head Coach Jeff Boettger, involved in the Team FCA event over Memorial Day weekend in Buffalo, which will draw more than 100 players from around the country, and the Chowder Cup in Boston in July.

Handy must find not only a new assistant coach to replace Hannon on his staff, but also someone to take the reins as director of both the Club Sports Hall of Fame and Varsity Club, organizations Hannon got up and running over the past year.

"Jake's an awesome guy, filled with a lot of enthusiasm," Handy said. "It's neat to see how God's been shaping his life since he's been down here, as a player and then a chaplain and a coach. I'm excited to see what God will be doing with his life up there."

Handy sends Hannon out with his blessings, as he did with Dalton Stoltz, the former Flames goalie and goalies coach who left mid-season to help his father-in-law start a church in Hampton.

"He's leaving to go into ministry, like Dalton did," Handy said. "That's one of the most rewarding things, to see someone we've been in the trenches with go up there and do something he's really passionate about. Their ministry they're going to be involved in becomes our ministry through the relationship we have with them. I know God's going to use him in a big way up there."