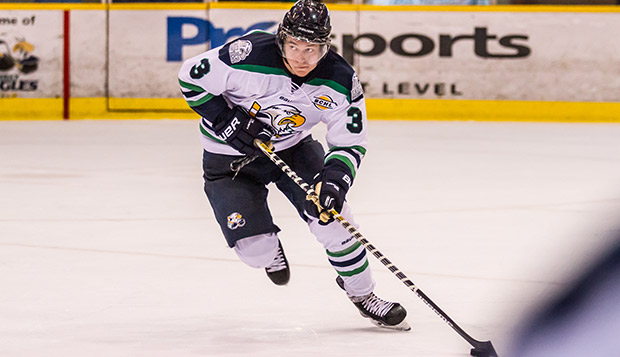 Zane Schartz, from Dallas, was an impact player on both sides of the ice last season with the Surrey Eagles in Vancouver.

Growing up in Dallas, Zane Schartz played all the typical American youth sports — football, basketball, and baseball — before lacing up skates and handling a hockey stick and quickly finding he felt most at home on the ice.

"I started playing hockey when I was 10 after my older brother picked it up and I just kind of fell in love with it," Schartz said. "You learn to like what you're good at so I quit all the other sports when I was 12 or 13 and just played hockey."

Schartz, who most recently played defenseman for the Surrey (Vancouver) Eagles of the British Columbia Hockey League (BCHL), is the first offseason commitment for Liberty University's ACHA Division I men's hockey team, helping to fill a void left by graduating senior captain Matt Sherry and Cam Bakker. Head Coach Kirk Handy announced Schartz's intention to join the Flames just one week after he attended College For A Weekend (CFAW).

Schartz said one of the deciding factors in choosing Liberty was the fan support the Flames receive in the LaHaye Ice Center, which is currently undergoing renovations that he said will transform it into an NCAA Division I-quality arena.

"I'm really happy about coming to Liberty," Schartz said. "It's where I'll grow the most as a Christian and the hockey's an awesome added bonus."

He plans to major in biology and is considering medical school after graduating. In addition to the new Science Hall, he toured Liberty's College of Osteopathic Medicine during his CFAW visit.

Schartz said that he and his brother, Derrek, who played four years of NCAA DIII hockey at Tufts University where will graduate in May with a biology degree, are best friends. They played hockey together growing up and have talked about opening a medical practice together one day.

A knee injury in January shortened Shartz's last season with the Eagles, but he expects to be fully rehabilitated by the time he reports to Liberty in mid-August.

"I'm not 100 percent yet, but I've started skating about once per week," Schartz said. "I plan to work hard — mostly on my skating which is my strongest ability — and come into the season healthy.

"I consider myself an impact player and I'm excited to come in and help the team as much as possible, and hopefully make a run at nationals," he added. "That's the goal. Over the next four years I'd like to win at least one national championship."

Schartz, who's 6-feet, 1-inch tall and weighs 200 pounds, logged a lot of minutes on the ice in the BCHL, where he emerged as an effective two-way player.

"I'm a power play guy and I'd say I'm more of a skilled skating, mobile defenseman," he said. "My size helps, but I'm not super physical. I have a good poke check and use my speed and agility in skating to try to out-skill the other guy, and outsmart them.

"I like to play both sides of the puck, all 200 feet of the ice, and try to limit my mistakes offensively and defensively," Schartz said. "I want to contribute in whatever way I can."