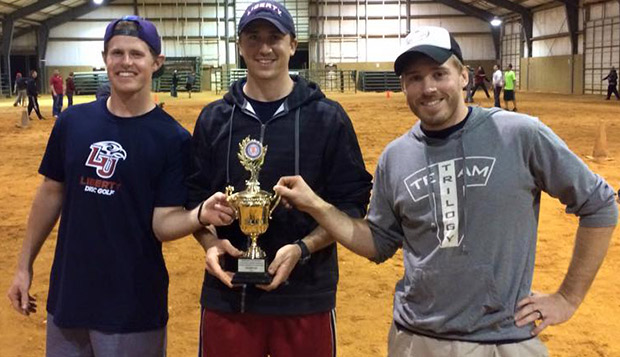 Enduring rainy conditions and saving its best for last on Saturday afternoon, Liberty University's disc golf team moved up three positions in the final round of Championship Flight doubles play to finish ninth out of 61 teams in the National Collegiate Disc Golf Championships with a combined score of 3-under 650 at the Hippodrome in North Augusta, S.C.

"It's a daunting and draining tournament but our conditioning showed in the way we picked up places the last two days," Flames Head Coach Steve Bowman said. "The guys battled the rain all day today and did the best we've ever done and earned an automatic bid to next year's championships. They were pretty pumped and excited and I was really proud of the guys to compete as well as they did at all levels. All of our teams were competing in the final round on the final day."

Individually, Lance Brown paced the Flames' Championship Flight players at 4-under 117 to tie for 43rd place in singles while fellow senior Devin Swartz came in 52nd at 3-under 118.

Liberty's First Flight team was tied with Colorado State for second place through nine rounds, before firing rounds of 46 in the semifinals and 44 in the finals to slip into third at 635, 29 throws behind first-place Ferris State. Freshman Ben Brown and senior Colby Robinson tied for 11th individually in singles play at 7-over 119 while Jordan Strother tied for 16th (9-over 121) and Justin Towns tied for 21st (10-over 122) out of 94 players.

In Second Flight play, the defending champion Flames finished runner-up out of four teams with a 15-under 643 shot total after 10 rounds, 24 strokes behind Ferris State (Mich.), which swept the Championship, First Flight, and Second Flight titles out of a total of 81 teams. Individually, Jarrod Goodhue, a graduate student, and sophomore Zachary Nicol tied for third place at 4-under 104, followed closely by Liberty freshman teammate Bridger Melton (3-under 105).

"Everybody was talking about our scores," Bowman said. "Right out of the gate, we started strong. The guys were ready to play. It rained pretty hard for the whole first round but we have practiced in the rain so we were ready for it."

Bowman said the completion of the new disc golf course near Camp Hydaway helped prepare the Flames for nationals.

"The new course is really amazing, from a design factor, matching up some of the elements and practicing on different lines and turns, it made a big difference for nationals," Bowman said.