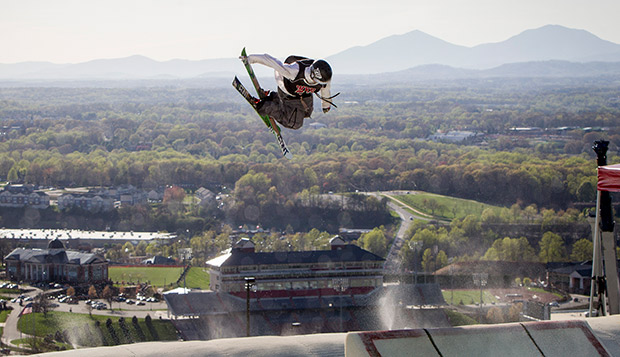 The competition was stiff, with riders competing for prize money for the first, second and third podium spots, respectively, in each event.

The men's ski events were dominated by a pair of familiar faces — brothers and locally-based Liberty alumni Jon and Tim Steltzer.

Jon Steltzer took first in the Rail Jam while Tim got the upper hand of a one-two sibling showing in the Big Air competition.

"Tim gets the worst luck in contests usually, so I was not even mad that he beat me in Big Air," Jon said, both brothers laughing. "That was super sick. He killed it, and without even pulling out his biggest trick, so that was super impressive."

"It was crazy as brothers to take home first and first in rails and jumps," Tim agreed. "We had a lot of fun. We've had a lot of crazy competitions in our years here, and tonight was one of the best for sure. It was fun competing together."

Men's snowboarding Rail Jam proved to be the tightest competition of the day. Minnesota-based rider Jesse Paul, who until the night before the competition had never ridden at the Liberty Mountain Snowflex Centre, edged out 14-year-old contestant Luke Winklemann to secure the top spot.

"The competition was really cool. I'd never done an event like this before," Paul said, gesturing to the synthetic Snowflex surface. "It was a lot more fun than I expected, and really cool to be able to ride with all these guys who ride Snowflex normally. To see how much they kill it and to feed off that energy was just a good time."

The evening ended on a high note, with Yale Cousino taking the top spot in men's snowboarding Big Air.

"There were more doubles tonight than we've ever seen in big air," Finch said, referring to aerial flips. "Riders were doing stuff I had never seen before, which just goes to show how guys are progressing here on Snowflex (at Liberty) Mountain."