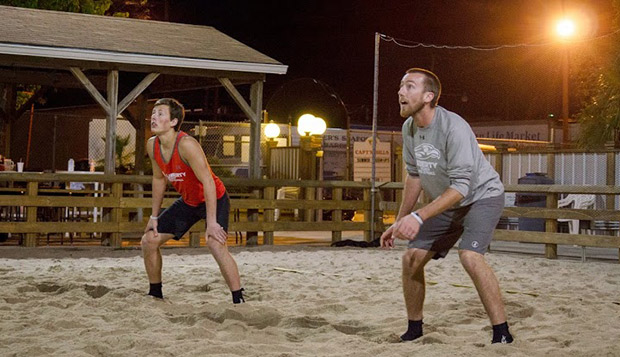 Liberty's Kaleb VandePerre (left) and Aaron Brooks get in the ready position before receiving serve in the AA Division finals.

Despite playing together only on a temporary basis, Liberty University's men's beach volleyball tandem of sophomore Aaron Brooks and senior Kaleb VandePerre showed instant chemistry in winning the AA Division of Saturday's Wilmington (N.C.) Series tournament, with a 16-21, 21-12, 15-10 triumph in the championship match that lasted until 11:30 p.m.

For VandePerre, it was his second AA victory after teaming up with senior Ethan Chase during last summer's Virginia Beach tournament. They will be reunited for the rest of the beach season while Brooks plays with senior Steven Fawcett. Chase and Fawcett, along with senior David Hong, were members of Liberty's men's indoor volleyball team that competed in the NCVF National Championships in Kansas City over the weekend.

"I expect both of those men's teams to perform even better as we will be signing up to play in Open division from here on out with those two teams," Flames Head Coach Rachel Willis said.

In the women's AA Division, Liberty's two tandems were eliminated in early rounds of the playoffs after competing well in pool play. The duo of sophomore Brittany Tyree and junior Elissa Mulcahy came within two points of advancing to the third round before being knocked out of contention in a hard-fought match against Mary Scott and Elena Trumbull, the eventual third-place team from Beach South, a junior sand volleyball club based in Greensboro, N.C.

The Lady Flames' pair of junior Samantha Evans and graduate student Kara Matthews finished in fifth place and Liberty's tandem of sophomore Emily Stotmeister and junior Becca Benson came in second in the women's A Division.

"Overall, even though I expected higher finishes for the women's division, I am happy with the way that we played, especially with the men's AA win, since that confirms the direction that we are headed," Willis said. "Once again, I saw significant improvement with our teams, even from two weeks ago when we played at Blue Sky (Tournament in Apex, N.C.). The level of competition in AA was much better this tournament as well, and our teams had so much fun playing against better opponents."

The Beach South club will join Virginia Tech in competing in this Saturday's Liberty Invitational, starting at 10 a.m. on the eight East Campus courts — four beyond the Intramural Fields and four behind the Liberty Lacrosse Complex.