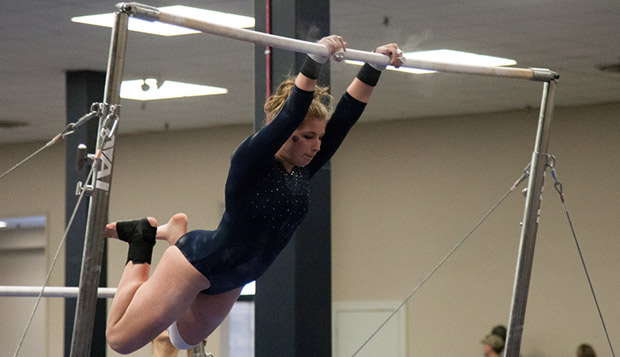 Liberty University gymnastics Head Coach Rachel Steele showed she hasn't lost her competitive edge in the sport as she qualified to represent the Lady Flames in Saturday's women's Level 9 All-Around finals of the National Association of Intercollegiate Gymnastic Clubs (NAIGC) championships in Philadelphia.

Steele had a personal-best fourth-place preliminary finish out of 212 athletes in the uneven bars with a score of 9.5 and was the 16th and final All-Around qualifier with a combined score of 35.725.

Sophomore Ashley Grim made the finals of the balance beam, landing a score of 9.25 to tie for ninth out of 222 participants in the preliminaries. She scored an 8.75 in her balance beam routine in the finals, placing 12th out of 20 finalists.

Steele tied for 26th with a score of 8.975 in that event, the one she placed first in as a junior for Liberty at the 2010 NAIGC National Championships in Texas.

Grim also tied for 21st out of 214 contestants in the vault with a preliminary score of 9.05.

As a team, not counting Steele's performances in the competition, Liberty placed 26th out of 30 teams represented at nationals after preliminaries.

Grouped in the same session of the Collegiate Division as Philadelphia powerhouse Temple University, Liberty's men's team managed only one finalist, freshman Cameron Streeter, who was 24th in the All-Around with a 70.1 total led by his eighth-place showing in the vault (12.8).

Streeter recorded a score of 12.05 in the finals as a shadow participant.