Snowflex Games could attract strongest field of riders yet 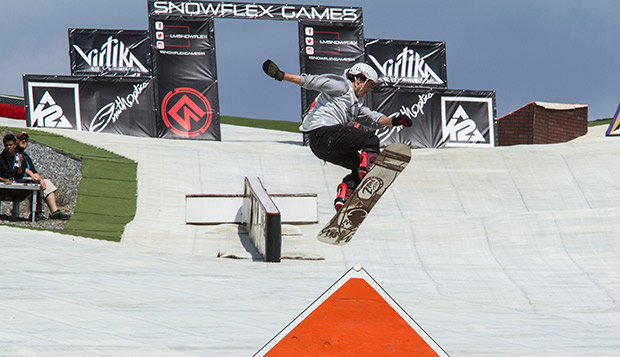 A snowboarder tackles a feature in the Rail Jam during last year's Snowflex Games on Liberty Mountain.

Stiff competition is expected for Saturday's Snowflex Games as top-level riders from all over the United States will be contending for prize money in prime time at the Liberty Mountain Snowflex Centre, with preliminary runs throughout the day and finals set to start around 6 p.m.

The Snowflex Games format has shifted back to a one-day competition with men's and women's ski and snowboard finals in Rail Jam and Big Air in the evening, rather than the late afternoon as it was last year. With College For A Weekend on campus, the event should draw a sizeable crowd under ideal conditions, with temperatures in the 70s during the day and 60s at night.

"Spectators definitely enjoy it more under the lights, when it's a little cooler," said Liberty ski and snowboard Head Coach Ryan Leeds, who won the snowboard Rail Jam last year and placed third in the snowboard Big Air competition last year. "Also, when it's cooler, the Snowflex surface gets faster, so condition-wise, it's better for competing. The only downside to a long event like that is it can get very exhausting, riding in the heat all morning and then riding again at night."

For the third year in a row, former U.S. Olympic snowboarder and Amazing Race participant Andy Finch will be announcing the event live, for a second straight time with former Liberty snowboarder Ethan Acree. Replays will be shown on a large video board set up on site and the event will be webcast on a delayed basis next week.

Leeds said the timing of the competition, right after Superpark 19 which Flames senior Kevin Hoff competed in this week at Seven Springs, Pa., is perfect for drawing a strong field of riders and skiers.

"As far as East Coast competitions go, the fact that we're doing it in April is a big draw because a lot of mountains are about to close and there's no better way to end your season than to compete for prize money on a dry-land slope," Leeds said. "I know some people are planning to come down from Superpark 19, which is only a five-hour drive."

Overall, he expects to have a more challenging route to the podium this time around.

"It will be a really talented field and has the potential to be the most talented field we've ever seen in the Snowflex Games," Leeds said. "As far as results go, the scores will be very close. It will be a fun competition, more difficult to win, but that's always exciting. Get ready to see some pretty big tricks off the jumps, as I've seen already in practices."

Liberty alumni brothers Jonathan and Tim Steltzer, who live and work locally — Tim at an engineering firm and Jonathan as a ski instructor at Snowflex — will be two of the favorites in the men's ski competitions.

"It's very rare for them not to place at a Snowflex event," Leeds said, noting Liberty Christian Academy senior Isaac Shepard, who is planning to compete for Liberty next year, could give them a run for their money.