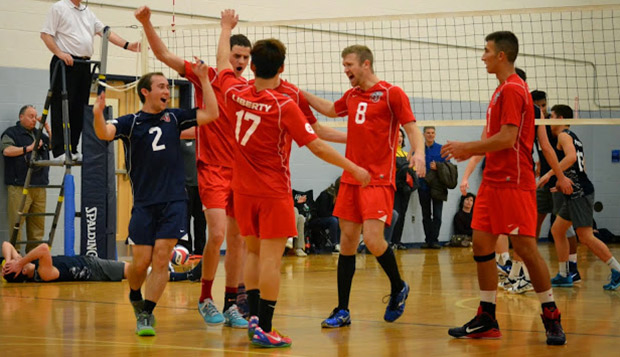 In Friday's second day of competition in the National Collegiate Volleyball Federation (NCVF) Division I tournament at the Kansas City Convention Center, Liberty University's 16th-seeded men's volleyball team rallied to win its morning challenge match over Utah Valley, 20-25, 25-17, 15-11 before being swept in its two afternoon matches to slip to the silver bracket of Saturday's championships.

"Utah Valley was only ranked 39th, but they were really good," Liberty Head Coach Bryan Rigg said. "We lost the first game, but came back to win the next two, which kept us from dropping into the bronze pool."

"He was great in passing and had a ton of great hits," Rigg said. "We let him go all around and play all six positions, and he was serving well, he had really good overhand passing and serve-receiving, and he played great at the net. He really brought good energy."

Liberty then played 17th-seeded University of California-Davis, which was coming off a loss to top-seeded Virginia Tech but rebounded to snuff the Flames, 25-16, 25-20.

"Teams we struggled against in the East Coast Championships and again here, too, are teams like UC-Davis that are very, very short, but play a different style of volleyball," Rigg said. "That's really our Achilles heel right now. We don't match up well against shorter, scrappy teams. We do better against the big hitters."

He said UC-Davis' middle hitters were only about 6-feet tall, and they only put up a soft block to change the trajectory of Liberty's spikes and keep the Flames from hitting straight down.

"They're not aggressive, but they are so defensive-minded and they can dig everything up," Rigg said. "When we got clean hits, they would always fill the holes with passers. They played good volleyball, almost like beach volleyball. All six of their guys are really good at passing and really intuitive. They really knew how to control the ball and most of their kills were from roll shots and tips."

Finally on Friday, Liberty squared off against top-seeded Virginia Tech, which it had lost tight matches to in the finals of both the EIVA South Division I and East Coast Championships. The nationals rematch was no exception as the Flames played the Hokies point for point in both games before falling, 25-21, 26-24.

"We've fought so hard against them and we were so close every time," Rigg said. "We knew all their players and all their tricks, but they just know how to wait it out and strike at the right time. They had the same game plan and were just as aggressive. We were blocking their big hitters and putting balls down. But they had some good jump servers who were a difference for them. In games separated by just a few points, they were a little more efficient and made fewer errors than we did."

The back-to-back losses drop Liberty to the top-seeded team in the silver bracket, where it will contend for 17th place overall in Saturday's single-elimination tournament play. The Flames will play a 10:30 a.m. match against 11th-seeded Marquette, which lost its challenge match Friday morning and barely got into the silver bracket that also features Liberty's East Coast rivals Rutgers, James Madison, Florida, and West Virginia.

If the Flames can get past Marquette, which was the runner-up in the Hoosier-Illini Classic that Liberty competed in, they would face the winner between Texas A&M and Minnesota in the quarterfinal round. Liberty has already guaranteed it will place higher than last year, when it finished 34th in its first time competing at the NCVF Division I level.

"Last year, we didn't get close to qualifying for the silver bracket," Rigg said. "Our ranking's higher than last year and we want to go out and win as many matches as we can and, from year to year, get better than the year before, so we're still moving in the right direction."