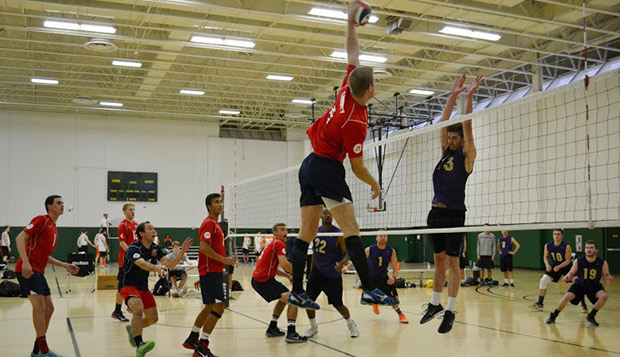 "We came out early and beat Minnesota in the first game and it was looking optimistic," Flames Head Coach Bryan Rigg said. "But they're a good team and they came back and played well. It went down to the wire and we were pushing them, but we just didn't finish it and they were able to come out with the victory."

The Gophers finished undefeated in the pool to advance automatically to the gold bracket of Saturday's championship play while the Flames (22-11) will play a challenge match against Utah Valley on Friday at 9 a.m. for a chance to get into the championship flight.

"Kevin was the leader offensively," Rigg said. "He had lots of kills and his jump serve was on again. He did really well. But the most important thing was Josiah was playing out of his mind. He was absolutely perfect, picking up all types of balls. Nothing really hit the ground. He was spectacular."

Freshman setter Nick Williamson was effective at setting up Snyder and the rest of Liberty's front line, including sophomore outside hitter Si Hershberger.

"Nick did a great job of distributing the ball," Rigg said. "He really mixed it up well and found the guys who were clicking. Si (Hershberger) had some big kills for us, with some off-speed (tips and dinks). Our last two tournaments were not his best, but he rebounded and played some of his better games today."

Defensively, the Flames were very effective at the net against UC-Irvine, but not at all against Minnesota.

"There were times we were blocking three to five in a row," Rigg said. "We had a ton of blocks against UC-Irvine. At other times, we were just a little late, which was one of the reasons why we struggled against Minnesota. (The Gophers) had a quicker set offense and their hitters were a little more talented and they were able to win that chess match at the net. That's something we've got to improve on (Friday)."

Rigg said Utah Valley, though only seeded 39th, is very similar to Minnesota.

"(The Wolverines) were well underrated at No. 39," Rigg said. "That's a really, really good team and it's going to be a tough, tough match. They have a lot of big hitters. Their weakness is passing, but they have a lot of height at the net. Defensively, our blockers need to pick it up."

Win or lose, the Flames will play two more matches on Friday for a total of six in two days before being seeded in either the gold (1-16), silver (17-32), or bronze (33-48) bracket of Saturday's championships.