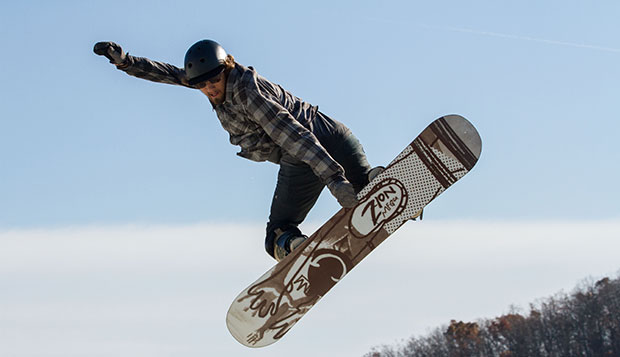 Liberty University senior snowboarder Kevin Hoff will have a unique chance to network with professionals in the industry and showcase his skills on spectacular features set up for Superpark 19, an end-of-the-season ski and snowboard film festival of sorts promoted by Snowboard Magazine, Sunday through Thursday at Seven Springs Mountain Resort in Champion, Pa.

Superpark, an invititation-only event for snowboarders and videographers held at a different location each year, will bring "the best terrain park crews, the best terrain park designers, and the best riders to the biggest, best, and most unique terrain park for filming and photography with action sports marketing companies," said Drew Sherwood, general manager of the Liberty Mountain Snowflex Centre (LMSC) and Liberty Mountain Skatepark. "It is extremely difficult to get into and it says a lot about Kevin, the team, the coaches, and what Liberty is doing with Club Sports and Snowflex."

Hoff, a business marketing major who will graduate in May, plans to make the most of the time at Seven Springs to build relationships and pursue his career path on and off the slopes.

"I want to work in the snowboard industry, marketing for a snowboard company, so this is a great networking opportunity for me," he said. "I'm definitely excited about that. I just love snowboarding. I do it here at school and I have fun in the moment and try to do my best, but I'm not competition-driven. There's too many young guys out there riding."

As captain of the snowboarding team, Hoff led the Flames to a third- and fourth-place team showings in the slopestyle and Rail Jam competitions at the March 1-7 USCSA National Championships at Mt. Bachelor in Bend, Ore., placing fourth and eighth in the two events individually.

He will be Liberty's first representative at a Superpark, invited by Brian Nero as a member of the No Names, a riding and filming team based out of Seven Springs that has made several trips to LMSC.

"We'll be riding from 10 a.m. to 7 p.m. every day with live webcasts focusing on certain features on certain days," Hoff said. "It's designed to be a ton of fun, wrapping the park at the end of the season with our friends. It's a very low-stress environment with the goal of people progressing snowboarding, and drawing hype and excitement about the sport and new features."

Liberty men's and women's snowboarding Head Coach Ryan Leeds said Nero started working at LMSC's Next Level Summer Camps during the day and filming at Snowflex at night and has continued to develop his craft, producing several short films featuring the No Names.

The first 18 Superpark events took place on slopes located in the Rockies, Sierra Nevadas, or Pacific Northwest, including last year's at Mt. Bachelor. But record amounts of snowfall this winter in the Northeast, and less favorable conditions out West, prompted the move to Seven Springs, which features seven progressive parks and the only 22-foot Superpipe East of the Mississippi.

"They got snow in Pennsylvania last week and I got a text from Brian who said they're building really big stuff," Hoff said. "It's going to be bigger than what was set up (for nationals) in Oregon, for sure.

"While I'm nervous about hitting the biggest stunts and jumps I've ever hit, I'm not going to go there and try to kill myself," he added. "I'm smart about how I go about my riding and learning new tricks. I'm going in kind of excited and want to be humble about it. I would have never guessed I would have been invited to something like this."