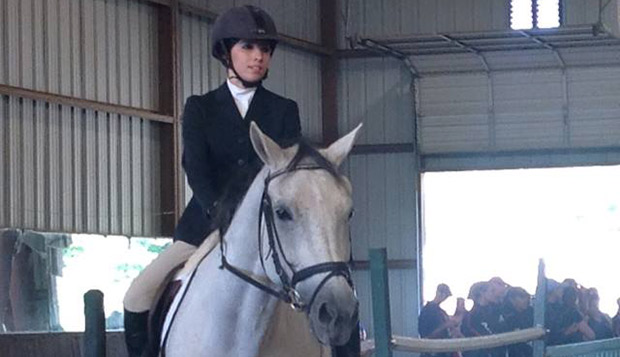 Murphy placed sixth out of 10 riders in the Beginner walk-trot division while Chenelle, the Region 5 champion in Intermediate over fences category, did not place in the finals, held in wintry weather conditions north of Baltimore.

"Morgan and Liz toughed out eight hours outside in 28 degrees and snow and rode excellently against some incredibly stiff competition," Liberty Head Coach Caroline Trexler said. "These were not only the best riders from each school, but the riders that had beaten out all of the other riders in their division in each regional show. It was a privilege to be part of such an exclusive group, especially for such a young team. Goucher College did a wonderful job hosting and our region represented very well."

Liberty hopes to use the experience as a springboard for next year, when it expects to have its first Western riders qualify for IHSA Regional competition. The Western team, assisted by former Virginia Tech coach Shelby Rader, started this season after the Hunt Seat team, assisted by Lori Matthews, made its debut in 2013-14.

"It was a tremendously successful season and wonderful learning experience to qualify for both regionals and zones with such a young team," Trexler said. "We are so proud of our riders and can't wait to hit the ground running for next year."