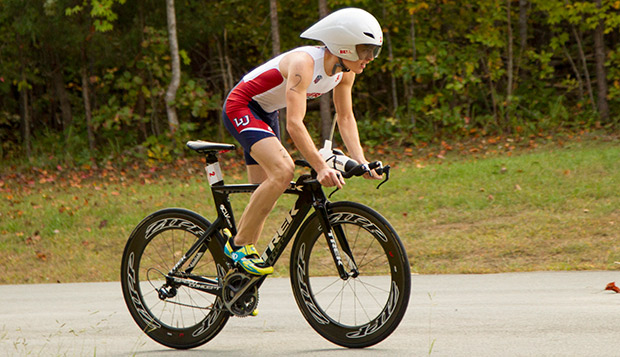 Liberty senior Joseph Anderson, one of the top competitors in the Mid-Atlantic Collegiate Triathlon Conference, will shift gears next fall to compete in cycling as well as triathlon.

Starting this fall, the addition of men's and women's cycling will bring the total number of teams offered through Liberty University's Club Sports department to 35.

"This was the perfect time for us to add cycling at Liberty," said Lee Beaumont, Liberty's senior vice president for Auxiliary Services, who oversees the program along with Senior Director of Campus Recreation Kirk Handy. "We believe we have the environment, facilities, staff, and support to have one of the top collegiate cycling programs in the country."

Parker Spencer, the first-year head coach of Liberty's men's and women's triathlon teams, will also coach the cycling squads, which is only fitting as a couple athletes will compete in both sports.

"I always like a challenge and having a cycling team at Liberty is something I've wanted to do for a while," Spencer said. "It's just a perfect breeding ground for a professional endurance athlete."

Spencer said it is an ideal situation for cycling to be introduced as a Club Sport, and he has the right training program designed to streamline elite athletes' paths to the professional ranks.

The Flames and Lady Flames plan to join the Atlantic Collegiate Cycling Conference, which currently features 15 schools including Duke, North Carolina, Virginia, Virginia Tech, and Virginia Commonwealth University. The 2014 USA Cycling Collegiate Road National Championships were staged in Richmond, Va. This year's event is scheduled for May 8-10 in Asheville, N.C.

"It is exciting because we'll be able to compete against many of the top teams in the country," Spencer said. "We're going to be bringing in some cycling specific athletes and we will have a couple on both."

He expects senior triathlete Joseph Anderson, who will be a graduate student next semester, to join the cycling team as well as the other incoming draft-legal cyclists from the triathlon team.

"The stronger he is as a cyclist and the fresher he can come off the bike, the better his run is going to be," Spencer said.

Parker, who works as a personal trainer for Endorphin Fitness in Richmond, has contacts in the cycling world as well as on the triathlon circuit. He is targeting an elite level of athlete to bring into the program, to set a solid foundation to build on for the future.

"We've already been reaching out to several athletes and we've got some very, very strong possible recruits," Spencer said. "We're going to try to make sure we do it right, right off the bat, and limit it to a certain standard of athlete. We're fortunate to live in an area that has produced some of the world's best cyclists."

Richmond has been selected as the host of this year's World Road Cycling Championships in September.

Spencer said Liberty's triathlon and cycling teams would practice together on road rides and indoor cycling stationary trainers, with bikes provided and professionally fit to team members who don't have access to one of their own.

Spencer said that cycling and triathlon's schedules overlap to some extent, with both having their biggest races in the spring. But they complement one another so well that he doesn't see that as an obstacle.

"Both teams will help strengthen each other," Spencer said. "They're not going to take away from each other. We'll never put athletes in a race that will distract from their personal goals."