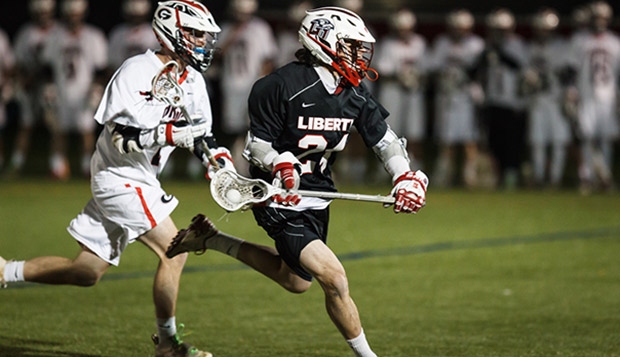 All Liberty University's men's lacrosse team needed for its third annual "Midnight Mayhem" Blackout Game, early Saturday morning against Georgia, was a little spark to set off an offensive fireworks show at the Liberty Lacrosse Field.

Junior midfielder Brett Bernardo and attack Ryan Miller ignited the Flames' offense and their defense held the previously unbeaten Bulldogs (6-1) to just one second-half score in a 19-5 triumph.

"The guys played really well tonight," Liberty Head Coach Kyle McQuillan said. "They saw the opportunity to put the game away and they took it. We'd love it if the fans had a great time and I hope they did, but for us, I've got to credit the guys for being able to take Georgia out of the game early. Games like this help build confidence toward the SELC playoffs and hopefully a bid to nationals."

Liberty (7-3) had four players score at least three goals, including Miller, who raised his season average to 5.0 points per game with four goals and three assists. He tallied three unanswered goals in a six-minute span midway through the third quarter, when the Flames outscored their guests 6-0 to extend a 10-4 halftime lead.

"That's not a huge surprise to us," McQuillan said. "Those two guys (Miller and Bernardo) are always the catalysts of good things. They were able to get in and create momentum for us offensively."

After Bernardo opened the scoring with a long shot from the left side and assisted Miller's missile from the top of the box into the upper left netting, Flames junior midfielder Bryce Mrakovich made a spectacular move from the top of the box, cutting left and through traffic before firing a shot past Georgia goalie Alex Austin for a 3-1 lead with 5:50 left in the first period.

"We knew that Georgia was undefeated coming into it and we were well prepared," Bernardo said. "Being the midnight game, we were obviously really excited for that. As soon as we got going, we didn't stop rolling, didn't lose that focus. We found our opportunities all over and as soon as we found the holes and the gaps, we capitalized on them."

Nearly 10 minutes into the second quarter, Bernardo checked Georgia's Cory Phillips out of bounds on the far sideline. That set up King's first goal, in the open right side of the box off an assist from Miller, stretching the Flames' advantage to 7-3.

"Defensively, we played really, really well," McQuillan said. "Both teams were really aggressive and that always makes for a better lacrosse game, both from our perspective and the fans' perspective."

Just over a minute later, Armstrong sent a pass to Lombardozzi behind the Bulldogs' cage where he found King out in front for a point-blank finish.

"The two freshmen (Lombardozzi and King) both stepped up huge," Bernardo said. "It's a team aspect and not focusing on themselves, they did their job, did what they had to do."

King and fellow freshman Morgan Pitts filled in admirably for junior middie Chad Moore, who missed the game due to an obligation with his ROTC unit in South Carolina.

"I had to step up in short notice," Lombardozzi said. "I normally play second line and I didn't know that Chad Moore was going to be headed off to Coast Guard duty, so I had to get ready really quickly. I'm glad I was able to put some goals in to prove to myself and to the team I could hang with the big guys."

McQuillan was impressed with a number of reserves who engaged in the physical fray.

"We had a lot of guys stepping up," he said. "We're more than halfway through the season now so it's good to start seeing some of those guys developing and getting the confidence that we need them to have going into the season's final stretch and the playoffs."

The Flames have less than 36 hours after the Georgia game to rest up for their next test when they host Tennessee, Sunday at 2 p.m. at the Liberty Lacrosse Field. 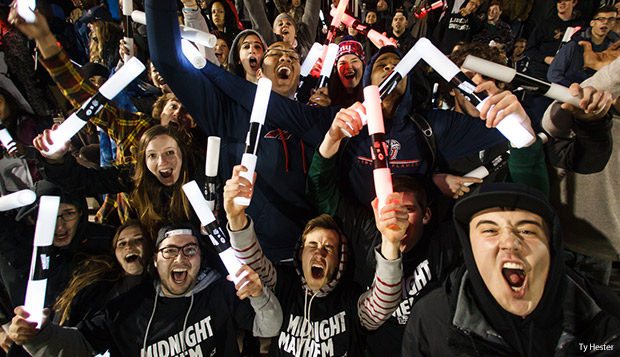