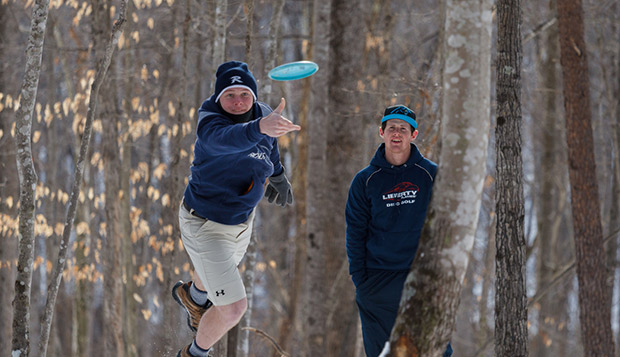 Liberty freshman Ben Brown fires a putt during the Flamethrower Invitational, Feb. 28 on the team's new course near Camp Hydaway, as senior Lance Brown looks on.

Members of Liberty University's men's disc golf team won their respective divisions of the seventh and final event in the Blue Ridge Area Winter League (BRAWL) Series, played at the Timber Ridge course on a cattle farm in nearby Bedford, Va.

Flames senior Lance Brown won the open division by shooting a 54 on the 18-hole first round and a 27 on the nine-hole second round for a total score of 81, six shots better than the second-place finisher. Fellow senior Devin Swartz (66-35-101) placed 11th in the open division.

Brown took seventh place in the final standings through seven events with 82 total points, including 27 for the first-place finish at Timber Ridge, and Swartz was 21st with 19 points.