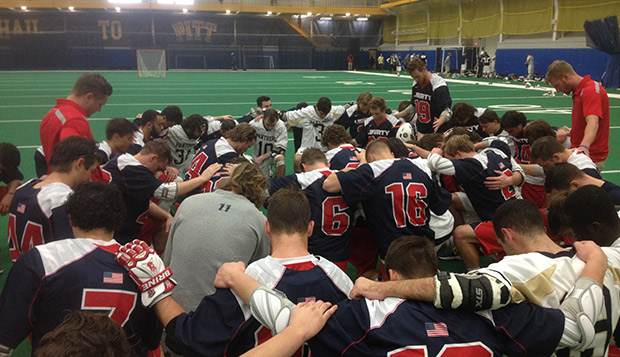 A day after feeling under the weather and sitting out the final three quarters of a win at West Virginia, Liberty University junior attack Ryan Miller racked up six goals to help the Flames rally from a four-goal, second-quarter deficit to defeat Pittsburgh, 16-11, Saturday afternoon in the domed Cost Sports Center.

"Ryan wasn't feeling 100 percent today, but recognizing the need to be there today, he led the team with six goals and two assists," Flames Head Coach Kyle McQuillan said.

The Panthers (3-4) took Liberty (6-3, 2-0 SELC Northwest Region) by surprise with their full-throttle style of play from the opening faceoff.

"They play very aggressive in-your-face defense and push out very hard on attack," McQuillan said. "They're not content to sit back and be settled and we weren't prepared for that mentally."

"As an unranked team playing against a ranked opponent, they were ready to play and had nothing to lose," he added. "It was a big win because it was an opportunity for us to come from behind and we never relinquished the lead after we took it back (in the third quarter)."

"It was definitely a pretty physical game and the field took some getting used to," McQuillan said. "That (tighter field) compressed the game, and they would box you in and go man-to-man."

After opening a 3-0 lead on goals by Miller and junior midfielders Brett Bernardo (3G) and Bryce Mrakovich (2G, 2A), the Flames allowed Pittsburgh to score two goals back-to-back in man-up situations.

"We spent way too much time in the penalty box," McQuillan said. "All but two or three of their goals came in man-up situations. We could not help ourselves. We were playing man-down almost the entire first half and they were taking advantage of it. We took three penalties in a row after they scored their first goal, and that gave them the confidence that they could play with us."

Trailing 8-4 after giving up six straight goals in the second quarter, the Flames responded with six unanswered goals of their own, sparked by Bernardo and Miller, who trimmed the deficit to 8-7 by halftime.

"Down 8-4, the guys were really positive and realized we just needed to settle down and play our game," McQuillan said. "We had a great second half, when we definitely took control. Our defense didn't allow a goal in the third quarter."

One factor clearly in Liberty's favor was faceoffs, where junior middie Charles Fianko won 27 of 31 chances.

"Chuck definitely dominated the faceoffs today, which was a really big reason for us being able to dig ourselves out of a hole," McQuillan said.

In a back-and-forth battle, the Flames used their quickness to surged ahead in the fourth quarter, getting a go-ahead goal and assist by Mrakovich after the Panthers tied the game at 10 and 11.

"Pitt played great but you could tell that was a very hard way to play four quarters," McQuillan said. "If it was a basketball game, they were playing full-court press the whole time. It was exhausting, but they left it all out on the field."

Junior midfielder Chad Moore added three goals — including the game-winner off the feed from Mrakovich — and one assist to balance out a potent midfield performance for the Flames.

"We had to use our No. 1 middies, Bryce, Brett, and Chad, more than I wanted to today," McQuillan said. "They got a lot of runs and they played well."

After playing three games in five days for the second week in a row, Liberty gets a five-day break before hosting Georgia (6-0, 2-0 SELC Southeast) Friday at midnight.

"We're looking forward to getting some rest before then, but we'll definitely be ready for Friday," McQuillan said.