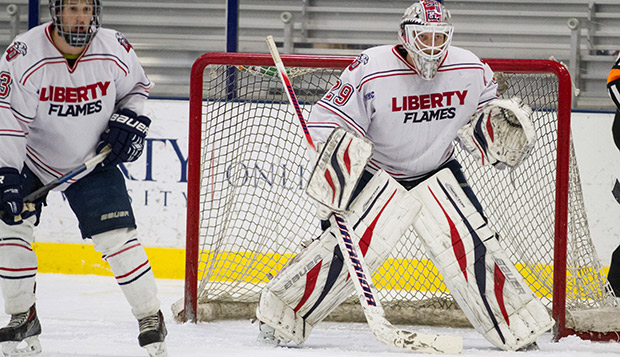 Senior goalie Blair Bennett, flanked by sophomore defenseman Roger Roulette, stood tall for the Flames throughout the 4-3 overtime loss to the Lakers.

In a rematch of last year's first-round game, won by the Flames in OT, the 2011 national champion Lakers (25-6-2) exacted a measure of revenge. They netted the game-winner with 2:24 left in the 10-minute extra period when defenseman Nicholas Heinrich one-timed a shot from the blue line that snuck past Liberty senior goalie Blair Bennett, who was screened on the play.

Following a scoreless first period in which Bennett played with poise and made several clutch saves, the Flames (18-11-1) shifted the offensive pressure in their favor and started the scoring with 15:30 left in the second period. From a difficult angle, sophomore forward Ben Freymond deflected a low shot taken from the top of the circle by sophomore defenseman Roger Roulette through the five-hole, beating Grand Valley State goalie Spencer Craig.

With the Lakers on a power play, Grand Valley State had one scoring chance glance off Bennett's shoulder and the crossbar before forward Colin Finkhouse threaded a backhand through Flames defensemen and Bennett's pads to even the contest at 1-1.

The Flames responded with 3:37 left in the period when sophomore forward Devon Docksteader's shot from in the right circle deflected off a Lakers defenseman and inside the right post, lifting Liberty to a 2-1 lead.

After a penalty kill by the Flames, that's how the second period ended before Grand Valley tallied the tying and go-ahead goals in a span of 55 seconds late in the third.

Forward Ian Hamilton netted the equalizer off a faceoff won by center Anthony Russo in Liberty's defensive zone with 6:26 left in regulation before forward Troy Marrett's wrist shot deflected past Bennett and gave the Lakers a 3-2 edge with 5:29 to go.

Flames sophomore defenseman Ryan Sidun leveled the score for a third time by finishing a quick slap shot off an assist from junior forward Peter Kazmierczak through Craig's five-hole with 3:18 left, forcing the overtime.

All games are being webcast live by the University of Utah.