Liberty to put on NAIGC-sanctioned meet in renovated gym 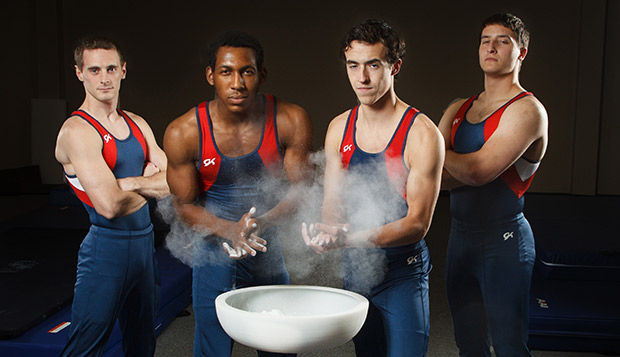 Liberty's men's team of Jonathan Baldwin (from left), Rufus Chapelle, Austin Minuto, and Cameron Streeter, is among the favorites at this Saturday's invitational.

Liberty University's gymnastics team will have the opportunity to showcase its recently renovated gym facility, located in The Plaza at 2323 Memorial Drive, Suite 19B in Lynchburg, this Saturday at 5 p.m. when it holds its first-ever competition at home, the Liberty Invite.

"The renovation has been such a blessing, a huge gift from Liberty," said Jonathan Baldwin, a second-year seminary student and team captain in his second season with the Flames. "Our equipment is top of the line and we've got more than enough room to do everything we need to do."

It will be the team's final meet before traveling to the National Association of Intercollegiate Gymnastics Clubs (NAIGC) National Championships, April 8-11 at the Pennsylvania Convention Center in Philadelphia.

"I'm so excited about having a meet here," said Alyssa Frost, a senior exercise science major and team captain who will be competing at nationals for the fourth year in a row, though she will be limited to the floor exercise and balance beam due to a wrist injury. "It will definitely give us confidence to have one more meet before nationals. Having it here will give us a more of a relaxed atmosphere because we're used to coming in here every day."

Besides the host Flames and Lady Flames, there will be a total of six schools competing — from  American University, James Madison, Salisbury University, Temple, Tennessee Tech, and William & Mary — with many bringing women's and men's teams. A total of 60 gymnasts are expected, including representatives from various schools on an NAIGC alumni team.

"We will have seating available at the event for 300 spectators, plus plenty of standing room," Liberty Head Coach Rachel Steele said. "We look forward to having a lot of friends and family on hand," as well as gymnastic fans from the Lynchburg community.

"I'm really hoping for a good turnout for that extra little boost of adrenaline," Baldwin added.

Seven judges will be scoring the six men's and four women's events in the NAIGC-sanctioned competition.

"This is the NAIGC's first year of sanctioning and we are the only university that they've asked to sanction our first meet, so it's exciting," Steele said. "That gives some validity to the meet. We will have live scoring projected on the wall and the results will be immediately online (on www.NAIGC.net)."

Liberty will enter nine women and three men in the meet. Lady Flames sophomores Ashley Grim, Jessica Hogue, and Sarah Escobar and senior Jenny Schools are eligible to medal in the All-Around by competing in the balance beam, floor exercise, uneven bars, and vault. Meanwhile, freshman Cameron Streeter, who placed third in the All-Around to lead the Flames to second-place showings at JMU and UNC Wilmington, will participate in all six events in the men's competition — the floor, high bar, parallel bars, pommel horse, rings, and vault.

Baldwin will be a top contender in the floor exercise while junior Austin Minuto specializes on the high bar. For the women, freshman Kayla Corriveau and Frost will vie for medals on the floor.

Besides JMU, the defending NAIGC national champion, Steele expects William & Mary and Temple to be among the favorites in the competition.

"It should be a good warm-up for nationals," Hogue said. "We're trying to adapt to the fact that we don't have that much depth yet, but I think we'll do really well. James Madison will be here. We've competed against them a lot this season and since they're the national champs, we know the level we need to be at for nationals."