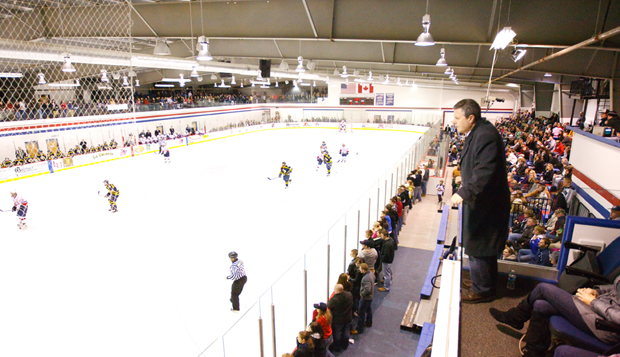 "It's an exciting time of year for us," said men's Division I head hockey coach Kirk Handy. "It gives us a chance for a fresh start for all five of our hockey teams as well as our figure skating team."

In the center of the rink is the Liberty Flames logo with the words "LaHaye Ice Center: Home of Flames." Also added was the logo for the American Collegiate Hockey Association (ACHA). Regulation lines were also repainted.

Earlier in the summer, crews began work on new offices for the hockey team and Club Sports staff at the center.

The ice center is home to the Liberty University men's and women's hockey teams. The men's Division I team finished 10th in the nation last season after making its seventh trip to the ACHA national championship tournament in the last eight years. The women's Division I team finished sixth in their first appearance at nationals. The ice center is also home to the women's figure skating and synchronized skating teams.