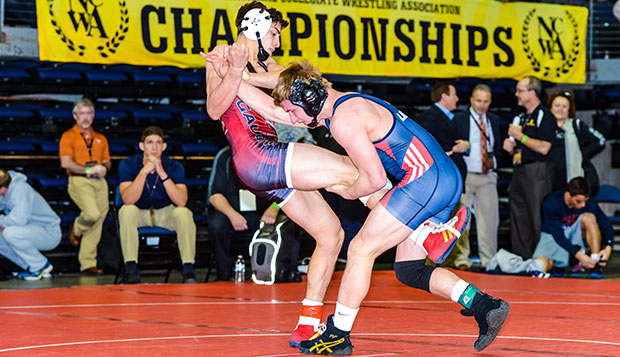 On the second day of the NCWC National Championships, Liberty University's wrestling team built onto its team lead with more pins, as well as major decisions and technical falls, and sent five individuals into Saturday's championship finals at the Allen Event Center in Texas.

With 176 points, including 24 for winning the NCWA National Duals, the Flames lead Mid-Atlantic Conference (MAC) rival Middle Tennessee State University (115.5) by more than 60 points heading into the third and final day of competition. Rochester (108), Naval Academy Prep (104.5), Central Florida (83), and Air Force Prep (82.5) are also in contention as Navy and Air Force each have four finalists.

Similarly, the 285-pound final will pit the top two heavyweights — Flames graduate student Josh Pelletier, who's ranked No. 1 in the NCWA, and Davenport's No. 2-seeded Glenn Geurink. After winning his first matches by pin on Thursday, Pelletier settled for two major decisions on Friday — by 10-2 count over Grand Valley State's Miguel Correa and a 12-4 score over Rochester's Luis Pinto.

Liberty sophomore Tim Nordan, who won his first two matches by pin on Thursday, advanced to the championship final with two narrow decisions on Friday — 6-4 over Brett Himes of Penn State-Dubois and 7-4 over Michael Dauterive of Texas-Arlington. He will meet Air Force Academy Prep's Isaac Jimenez in Saturday's final.

Senior Chase Boontjer reached the semifinals in the 165-pound weight class with an 18-3 technical fall over Rochester College's Tyler Vogt before being forced to take a medical forfeit in his bout with PSU-Mont Alto's Clay Kocsis.

On Thursday, Liberty 149-pound junior Peter Tatanish was sent to the hospital with a neck injury sustained during his consolation match against Rowan's John Chillem. The Flames visited him there that night and he was released in time to watch some of Friday's action in person.

Action resumes Saturday at 11 a.m. (EST). Results and live streams of matches throughout the tournament are available online.