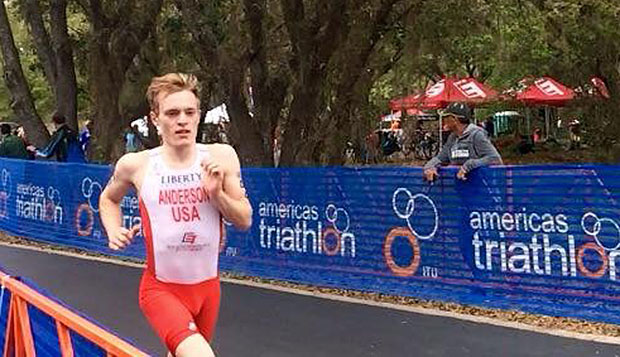 "For his first draft-legal professional race, Joey definitely did well competing against some of the best competition in the world," Flames first-year Head Coach Parker Spencer said.

He encouraged Anderson to enter the professional draft-legal race to push his limits in preparation for the April 24-25 USA Triathlon Collegiate Club National Championships in Clemson, S.C.

"We're taking a bit of a different direction with Joey," Spencer said. "The races he's been doing have been races he can easily do very well at, meaning top-five finishes. As an athlete, you know if you start competing at a higher level against higher competition, you're going to rise to the challenge. Having Joey compete against some of the top athletes in the world, the goal is to be at that level."

Spencer, a former Liberty triathlete representing Endorphin Fitness, where he works full-time in Richmond, placed 29th on the first day of the U-25 Elite Development Men's Race in 1:04:17.6.

Caleb Edmonds, who graduated from Liberty last spring, placed 12th in 1:01:42.8 on Day 1 and 13th in 1:00:42.2 on Day 2 while Flames graduate assistant Josh MacDonald entered but did not finish either race.

Both Edmonds and MacDonald are part of USA Triathlon's Collegiate Recruitment Program.

"The goal of that group is to go professional and it's an Olympic pipeline, trying to get them to go to that level," Spencer said.

Spencer and the Flames' past, current, and future Flames remained in Clermont, Fla., this week, spending their spring break at a triathlon training camp at the National Training Center, which has indoor and outdoor facilities. On Monday and Tuesday, athletes fine-tuned their cycling and swim techniques and did some running work. They also listened to lectures covering specific cycling components before using the outdoor pool for swimming practice.

"They are working with some of the best coaches in the country alongside a bunch of other Collegiate Recruitment athletes, many of whom are seeking their professional license in the sport," Spencer said.