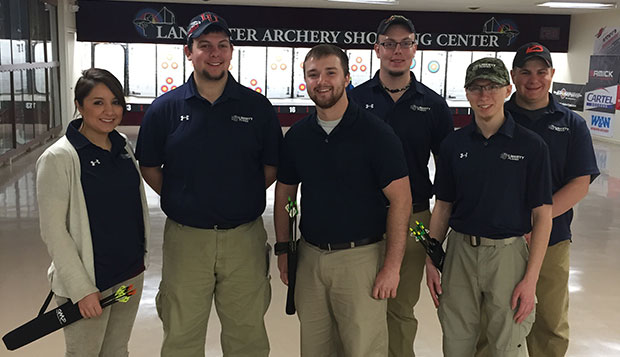 Out of more than 2,000 competitors from 16 sectional events around the country, Flames junior Ian Rigney captured national indoor champion honors in the men's bowhunter division by hitting the bull's-eye nearly 99 percent of the time in the two-day competition.

Shooting in groups of 24 in the indoor range, archers fired 60 arrows each day — five in each round — from a distance of 20 yards. Ten points were awarded for bull's-eyes while arrows landing in the target's successive rings counted for nine, eight, seven, or six points, respectively.

"That was his best round ever," Liberty Head Coach Mitch Reno said. "He was in first place from start to finish, and he averaged 9.89, which is nearly perfect. He was really excited about it."

Besides Rigney, the three other Flames in the men's bowhunter category — junior Chris Britton (1,104) and freshmen Jason Lynch (1,074) and Zach King (1,047) — finished second, third, and fifth, respectively, in the Pennsylvania sectional field of nearly 200.

Hunter Jacobs, the Flames' lone senior and sole competitor in the men's compound division, finished third overall, only two points out of second place, with a two-day score of 1,124.

"That put him in the top 20 in the national rankings because two guys he competed against finished first and third in the country," Reno said. "He did really well and had a super high score, so it was pretty impressive. He was one bad shot from being one of the best in the nation."

"She was beating the girl who finished first, but had some bow issues the second day," Reno said. "A couple of her arrows hit the wall and she finished second."

Had Houseknecht been available for the USCA National 3D tournament in October, Liberty might have challenged for the team championship.

"We're trying to get ladies on the team," Reno said. "We need more women out."

Reno credited the team's strong faith and work ethic for its success at the sectional and national levels.

"We pray before every competition and set a goal each day of what they each want to shoot," Reno said, noting King set a first-day goal of 500 and shot a 509 and a second-day goal of 530 and fired a 538. "Everybody met or exceeded their goals except Deanne, who had a first-day 321 total because her bow malfunctioned."

The high marks were surprising considering this was the first indoor competition for half of the team.

"We're way stronger at 3D competitions because we're all hunters," Reno said. "This is not as exciting. It's really about consistency and practice."

In the months leading up to the indoor competition, the Flames practiced two to three nights per week at Tru Ball, a Christian-owned company in Madison Heights, Va., that features an indoor archery range.

Their hard work paid off this past weekend, and this Sunday, Liberty will return to its preferred form of the sport by competing in a 3D tournament hosted by the archery association in Hurt, Va., a national qualifier for an event in late May.

Between 25 and 50 people from throughout the region will compete in the sanctioned outdoor event, with archers walking through the woods and firing through shadows and light, limbs and leaves, at targets on 3D animals ranging from dear, bear, and turkey from unknown distances.

Reno expects Rigney, Britton, Lynch, and King to vie for three national bids in the bowhunter division with Jacobs, shooting from farther back, a shoe-in to qualify in the compound division.