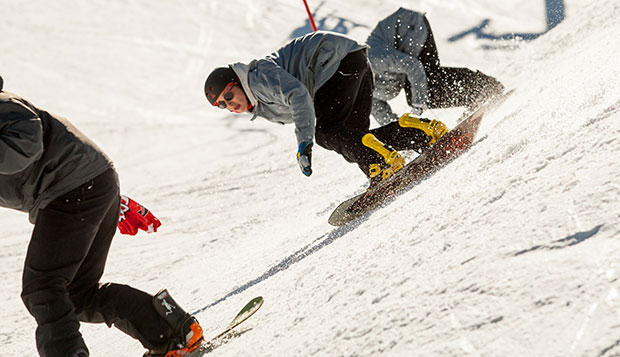 The Flames' men placed eighth out of 26 schools represented with 99 points. Senior Kevin Hoff was Liberty's only rider to make it out of the time trials into the bracket's first round, where he was eliminated by Vermont's Emmett Ellemaker in a two-man race.

"We dIdn't do as well in Boardercross as we had in Rail Jam and Slopestyle," Liberty Head Coach Ryan Leeds said. "There were more racing teams there and a higher number of entries, definitely, people focused on the racing aspect of the sport than the freestyle aspect, which is our strength. For a lot of these competitors, this is their type of event. They're racers. They know how to use their edges effectively and know how to finish around a gate."

Three of the teams that placed ahead of the Flames were Southeast Region foes — third-place Virginia, fifth-place Duke, and seventh-place Appalachian State. Sierra Nevada and Westminster finished first and second, respectively.

"It was fun and it was a learning experience for us, which is what we were expecting," Leeds said. "We were really focused on the Rail Jam and Slopestyle, but we were excited for Boardercross. It was one more event we can compete in, because it's a mix between slopestyle and downhill."

For the Lady Flames, who tied with Michigan State for ninth place with 94 points, two of their three riders — sophomore Sydney Beatty and senior Brooke Gibson — qualified to the bracket round of the competition before being eliminated in the first race.

"They were very competitive," Leeds said. "Both had a really good pull out of the start gate. Unfortunately, just because of their times out of the time trials, they didn't get to pick the best lane.  Because of that, they weren't able to get the inside track, which is crucial for the race."

Gibson fell when she was in third place in her bracket round race, but still finished 28th overall. Beatty got out to a good start but fell behind after the first two turns and took 30th.

"Had (junior) Brandy (Fronte) not fallen, she would have made it into the final," Leeds said of Fronte, who placed 36th. "She fell twice in her time trial and still only finished five seconds behind the competitors who advanced into the bracket round."

Conditions at Mt. Bachelor were better than what Liberty had experienced in its only two Boardercross events of the regular season down in North Carolina, though there wasn't enough snow to make a Halfpipe course so that event was replaced by the Rail Jam.

"It was still pretty slushy all week, with temperatures between 40 and 60 degrees," Leeds said. "I think we know what we can improve on for next year and we're in the market for some new race equipment. Across the team, we need to learn how to use our edges more effectively."

Next year's USCSA National Championships will be held back on the East Coast, at a yet-to-be-determined slope.