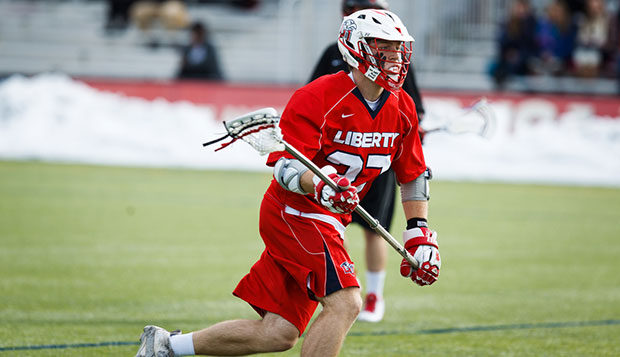 Defensively, Liberty's men's lacrosse team couldn't have been much more stingy than it was in Saturday afternoon's SouthEastern Lacrosse Conference contest at Northwest Region rival George Washington University in Washington, D.C. The Flames shut the Colonials out in the first and fourth quarters of a 10-2 triumph in the first of four games away from the Liberty Lacrosse Field over spring break.

"Offensively, we were able to do exactly what we wanted to in the first half, and defensively our guys were dominant," Liberty Head Coach Kyle McQuillan said. "We went into halftime up 9-1 and obviously slowed things down and took our time in the second half. The defense deserves some credit. As a whole, they all played very well, and gave us the ability to control the game."

Senior goalie Ethan Kamholtz and his backup, freshman Dave Jenson, only had to make five saves combined in 60 minutes of play, allowing single goals in the second and third quarters.

Junior midfielder Charles Fianko won 13 of his 15 faceoff chances to set the tone for the Flames' attack.

"Charles had one assist, led team with eight ground ball pickups, and was very dominant in faceoffs today, which allowed us to really control the game," McQuillan said. "It was another good opportunity to test ourselves and test our depth. We were able to get all of our guys in and kick off our spring break. We've got a long road trip ahead of us so we were happy to get out of there with a win."

"We were able to get some points pretty early in the game, especially there in the second quarter," McQuillan said, noting the Flames outscored GWU 6-1 in the second 15 minutes of action. "We were in control and we wanted to try to implement and practice some of the offenses and formations we'll be using next week. We used this game as an opportunity to try a test run on those things and troubleshoot some of the other areas of our game."

Liberty (3-0, 1-0 SELC Northwest), ranked 16th in the latest MCLA Poll, flies to Arizona on Monday morning for games at No. 9 Arizona on Tuesday, No. 4 Grand Canyon on Thursday, and No. 2 Arizona State on Friday.

"This is probably the biggest three-game stretch for the Liberty lacrosse program," McQuillan said. "We have an opportunity to go out and test ourselves and we're looking forward to it. We'll be facing three of the better teams in the nation right there in the state of Arizona and all of them will provide us a pretty good barometer. By the end of the week, we'll have a pretty good understanding of where we stack up on a national level."