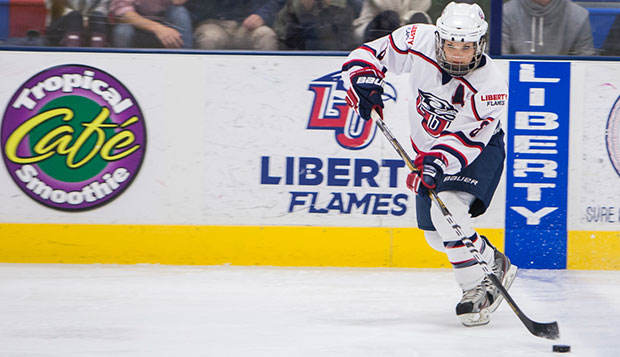 The Lady Flames (30-4-1) will face top-seeded, defending national champion Miami of Ohio, a 6-0 winner over Grand Valley State in Saturday's second Final Four game, in Sunday's 1 p.m. final. It will be webcast live on YouTube or fans can listen to the live action or receive Twitter updates by following @ACHAwomensD1.

Despite dictating the early action, Liberty found itself trailing 1-0 after the first period against Adrian (13-8-4), which entered the tournament as the No. 6 seed. The Bulldogs scored first when forward Alicia Tait lifted a backhander into the top right corner of the cage, beating Liberty senior goalie Chantal Lischynski with 8:23 left in the opening stanza.

"Even when they scored in the first period, we were pretty much dominating the play and cycling the puck in their end," Liberty Head Coach Paul Bloomfield said. "They just got down in our end and the puck came out right to (Tait) on a rebound."

Liberty, which had only converted on one of seven power-play opportunities in its three games of pool play, capitalized on its first two man advantages against the Bulldogs, tying the score at 1-1 on the first with 12:11 left in the second period.

Living up to her name, freshman forward C.J. Tipping tipped in the equalizer from the side of the cage, deflecting a shot off the stick of senior forward Sarah Stevenson into the net.

"That was a good shot right from the point and there were quite a few bodies in the crease," Bloomfield said. "It was a low, hard shot, easy to get stick on it and bang it home."

From that point on, the Lady Flames took complete control of the contest.

"The girls didn't get down," Bloomfield said. "When we got that first power-play goal, that turned the tide."

With Liberty back on the power play with 3:55 to play in the second period, MacArthur finished off assists from junior forward Carrie Jickling and senior forward Amanda Grainger with a point-blank score from out of a scrum, putting the Lady Flames on top to stay.

"We had pressure on the net, right out in front," Bloomfield said. "There was a melee there so the goal wasn't pretty, but it didn't need to be."

Just 41 seconds later, MacArthur added an insurance goal off a faceoff won by Stevenson, who finished with two assists after netting four goals in the past two games against Grand Valley State and Massachusetts.

"She was just there and took a swat at it," Bloomfield said of MacArthur. "The puck got dumped in front of the net and she just finished the job. She's quick with her stick and capitalized when there was the opportunity."

Liberty outshot Adrian 32-23 and Lischynski, a first-team All-American for the second year in a row, made 22 saves.

"Things started getting a little chippy in the third period and I told the girls to stay out of the penalty box and keep working hard, and it worked out well," Bloomfield said.

The Lady Flames advance to their second championship final in three years after finishing as national runner-up to Minnesota in 2013 and edging Rhode Island in last year's third-place game.

"I think they're looking to the goal, staying focused on one shift and one period at a time," Bloomfield said. "The girls are hungry, and they're all pretty healthy so I think they're prepared to do what they need to do."