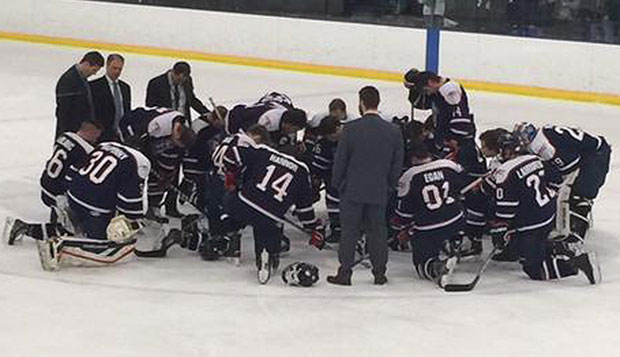 The Flames gather at center ice to pray after Saturday's 5-2 loss to the Bobcats at the OBM Arena in Strongsville, Ohio.

In recent seasons, Liberty University's ACHA Division I men's hockey team has become all too familiar with the finality of single-elimination playoffs.

The 11th-seeded Flames, making their eighth ACHA DI National Championships appearance in the nine seasons they've played at that level, relived the agony of an early-round, season-ending exit in Saturday's 5-2 opening loss to sixth-seeded, four-time national champion Ohio in the OBM Arena outside of Cleveland.

Liberty (25-12-4) opened a 2-0 advantage by the end of the first period before allowing Ohio to tie it up with two power-play goals late in the second. Then in the third, the Bobcats pounced on the Flames for three unanswered goals at even strength, reminiscent of the teams' second-round nationals matchup in 2013 in Chicago, where Ohio tallied three power-play goals in the third period of a 7-4 victory.

Facing the nation's top-rated defense, which has only allowed 67 goals this season (1.7 per game), the Flames' top line was shut out for the contest despite maintaining more than their share of puck possession and applying plenty of pressure around the Bobcats' cage.

"We had some pretty good chances (in the second and third periods) but we weren't able to find the back of the net," Liberty Head Coach Kirk Handy said. "It's a tough situation. For 50 minutes, I thought we played very well. We had a big letup and they scored three goals in a minute and 28 seconds there in the third period and that was the difference in the game. Ohio played well today. They were able to make it happen."

The Bobcats advance to Sunday morning's second-round showdown with third-seeded Minot State in a semifinal rematch from 2013, when the Beavers went on to capture their first national title.

In the first period, the Flames made the most of their chances, scoring first on the power play. Moments after freshman forward Luke Hannon's near miss on a backhanded follow of a shot by senior forward Lindsay LeBlanc, sophomore defenseman Chase Harris reset Liberty's attack along the blue line. He cycled the puck to senior forward Ryley Egan who sent it to sophomore forward Robert Ward on the left wing. Ward unloaded a slap shot that sophomore center Grant Garvin put away from on his knees in the left crease, lifting the puck over the shoulder of Ohio goalie Ryan Heltion just under the crossbar for a 1-0 lead with 11:09 left in the first period.

Then, with 4:39 left in the period, senior forward Ryan Kerr skated the puck down the right wing and rifled a sharp-angled shot inside the left post, above the pad and below the blocker of Heltion, doubling the Flames' advantage to 2-0.

Ohio (27-10-2), which boasts the best penalty kill in ACHA Division I, showed it can also capitalize on the power play, evening the contest with two second-period goals on the man advantage. Michael Harris (22 goals, 15 assists) drew the Bobcats within 2-1 by finishing a shot in the slot off an assist from along the left boards by Ohio's co-leading scorer Joey Breslin (15G, 22A) with 8:00 left.

Liberty generated three excellent opportunities to pad its lead back to two goals over the next six minutes. Freshman forward Paul Lamoureux's shot from point-blank range in the right crease got through the legs of Heltion before bouncing off the left post. A minute and 20 seconds later, with the Flames on a two-on-one break, junior forward Danny Logan's shot in the left crease was denied in similar fashion that Garvin's backhander off a crossing pass was four minutes later.

In the closing minute of the period, seconds after Ohio's four-on-three power play turned into a five-on-four, Bobcats' third-leading scorer Patrick Spellacy finished an open putback near the left post of a shot through the slot by Harris, tying the game at 2-2.

Moments after Pinel saved a shot off a backdoor pass in front of the net, Harris made a steal and started a fast break to Spellacy, who had his shot through traffic glove-saved by Pinel. A minute later, Derek Rahme received a pass from behind the net in the left crease and put the game-winning shot past Pinel with 9:58 left in regulation.

Just 78 seconds later, Spellacy took advantage of a two-on-one opportunity to double Ohio's lead to 4-2 by firing a fast-break shot past Pinel into the upper-left corner of the net. Less than 40 seconds after that, the Bobcats netted their fifth unanswered score on a breakaway finish on the left wing from forward Michael Palasics.

"When it was 2-1, we had a couple great chances to up the lead," Handy said. "They scored those goals and that changed the game really quick. Both teams played well. The game was right there for the taking the whole time."

All six of the Flames' seniors, other than goalies Cary Byron and Ian Harris, finished their careers on the ice for the final shift, two minute after Liberty Head Coach Kirk Handy pulled sophomore goalie Matt Pinel for the man advantage.

Defensemen Matt Sherry and Cam Bakker and forwards LeBlanc, Egan, Kerr, and Christian Garland, who led the team to nationals in each of the past four seasons, had the honor of  finishing their Flames careers on the ice together.

"I'm proud of the guys and what they've done this year," Handy said. "They really grew our program this year and I'm proud of how they've grown as men thorughout their careers. Praying at center ice, even after a loss, those are huge things, and a testament to our team and our program."