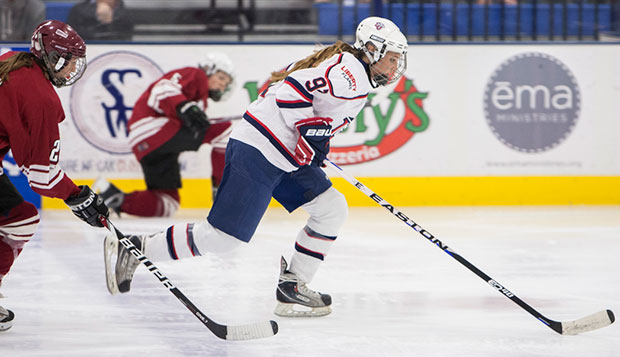 The Lady Flames won all three games against UMass this season, starting with this Oct. 3 clash at the LaHaye Ice Center.

A year after being swept by Massachusetts in the regular season and losing to the Minutewomen in the first round of the ACHA Division I National Championships, Liberty University's ACHA DI women's hockey team turned the tables on UMass (24-8-1) this season.

The thiird-ranked Lady Flames won both games against the then No. 2 Minutewomen over Homecoming Weekend at Liberty, Oct. 3-4, swapping places with them in the next ACHA DI poll. Seeded second in this week's ACHA DI tournament, the Lady Flames upended fourth-seeded UMass again in Friday's third and final round of pool play, winning 2-1 at the York (Pa.) Ice Center.

Freshman forward C.J. Tipping put Liberty on the scoreboard with 34 seconds left in the first period on a power-play goal assisted by junior forward Catherine Burrell and senior forward Amanda Grainger. Senior forward Nikki McCombe pushed Liberty's lead to 2-0 after finishing off a pass dumped into the crease by senior forward Jenny MacArthur with 10:38 left in regulation, providing the cushion the Lady Flames needed.

Junior goalie Kirstina Toppazzini got the start between the pipes and was one minute short of posting a shutout before UMass forward Amanda Abromson made it a one-goal game with 59 seconds remaining in regulation.

"They didn't have anything to lose and it got pretty physical at the end," Liberty Head Coach Paul Bloomfield said. "There were a lot of penalties."

Both teams took 30 shots on goal and Toppazzini made 29 saves.

As the only undefeated team in pool play, the Lady Flames (29-4-1) received the top seed entering Saturday's Final Four and will face Adrian, seeded sixth going into the tournament, starting at 1:30 p.m.

Miami of Ohio, the defending national champion and No. 1 seed coming in, will face Grand Valley State in the other semifinal, set for 4:15 p.m.

Fans can listen to the live action or receive Twitter updates by following @ACHAwomensD1.