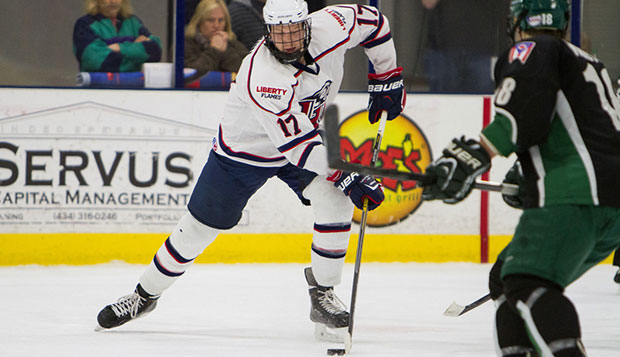 Liberty sophomore defenseman Grant Garvin battles for possession of the puck in the Flames' first game against Ohio, Jan. 23 in the LaHaye Ice Center.

Before being swept by the Bobcats this season (Jan. 23-24 at the LaHaye Ice Center) and taking both games from Ohio at Bird Arena in the fall of 2013, Liberty knocked the Bobcats from the No. 1 spot in the ACHA DI poll in the teams' second meeting on its home ice, Oct. 27, 2012.

Ohio exacted a measure of revenge that postseason, scoring three power-play goals in the third period to pull away from Liberty, 7-4, in the second round of the 2013 ACHA DI National Championships at the Edge Ice Arena near Chicago.

"Ohio's a very solid hockey team and we've been looking forward to playing them again ever since the regular season ended," Liberty Head Coach Kirk Handy said, referring to the Flames' season's first home sweeps of ACHA DI opponents West Virginia and No. 3-ranked Minot State.  "We feel like we gained a lot of momentum the last two weekends. We got some injuries straightened back out and it's made a big difference. We are on a roll and we're looking good in practice. Guys are working hard and we feel confident going in."

Handy said the Flames are a different team now than they were when they hosted the Bobcats in January.

"We're firing on all cylinders right now and we're excited to be playing our best hockey going into the tournament," he said.

Riding its third four-game winning streak of the season into the tournament, Handy believes Liberty is peaking at the right time to make a deep playoff run.

"We feel like we have the team to go a long way in the tournament," he said. "The style of play that we play is a tournament brand of hockey and we're real excited about the opportunity to go out there and to lay it all on the line and to do everything we've got to win."

The relationship between Handy and Ohio first-year coach Sean Hogan goes back farther than that between the two teams. Prior to taking over the Bobcats, and a three-year coaching stint at Arizona, Hogan was the head coach at Oakland (Mich.) when the Golden Grizzlies edged the Flames in overtime in the 2006 ACHA DII National Championship game. Both teams moved up to their current level the next season, when the Golden Grizzlies captured an ACHA DI crown.

The tournament is being webcast live by www.fasthockey.com. For game results, visit the team page or follow the Twitter feeds on the Club Sports website or go to the ACHA DI men's, tournament site.