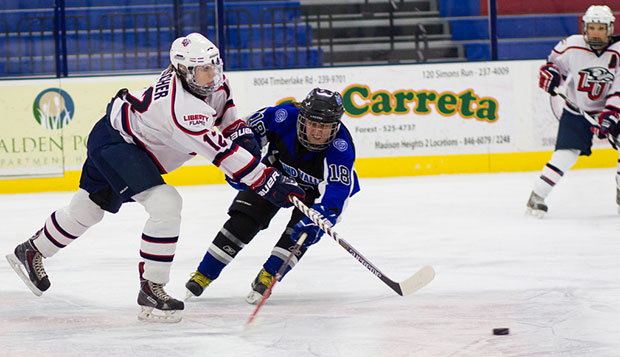 Liberty senior defenseman Madison Fischer stretches for the puck in a Jan. 9 match against Grand Valley State at the LaHaye Ice Center.

Liberty University's ACHA Division I women's hockey team, seeded second in this week's ACHA DI National Championships, became the first in the eight-team field to qualify for Saturday's Final Four, Thursday night at the York (Pa.) Ice Center. The Flames won for the second time in as many nights, shutting out fifth-seeded Grand Valley State, 3-0, in the only one of four tournament games on the day that didn't go into overtime.

"It wasn't a walk in the park. We had to work for it," Liberty Head Coach Paul Bloomfield said. "We put a lot of heat on them, but they're a big team and they kept coming."

Meanwhile, as an indication of the level of parity in the tournament, top-seeded, defending national champion Miami of Ohio settled for a 1-1 tie against No.6-seeded Adrian in the opposite pool.

The Lady Flames swept the Lakers at home on Jan. 9-10, winning by 3-2 and 2-0 scores, so they knew what to expect going into Thursday's rematch.

"That's one advantage to playing them in the regular season," Bloomfield said. "We had to change our game to compensate and we played to them, to their style."

The Lady Flames (28-4-1) posted their 16th shutout of the season and senior goalie Chantal Lischynski recorded her sixth, repelling 18 shots, including the potential equalizer off the stick of Grand Valley's top scorer Katie Danto that bounced off both pipes before rattling out of the cage late in the second period.

Moments after Grand Valley State's 6-foot-3 freshman goalie Lauren Allen (1.92 goals-against average 93.9 save percentage) made a couple spectacular saves, senior forward Sarah Stevenson (20 goals, 34 assists) doubled Liberty's lead to 2-0 with 56 seconds left in the stanza by deflecting in a shot from the point off the stick of junior defenseman Brittany Hymers.

"Hymers took a hard slap shot, right on the ice," Bloomfield said. "There was lots of traffic in front of the net and Sarah tipped it into the corner."

Junior forward and Lady Flames co-leading scorer Carrie Jickling (34G, 20A) had lifted Liberty to a 1-0 lead just 16 seconds into the second period off assists from Stevenson and freshman forward C.J. Tipping.

Then with 14:54 remaining in the third, after Hymers struck a post with the Lady Flames on the power play, Stevenson netted her 20th goal of the season and fourth in two tournament games. She buried a shot to Allen's blocker-side after junior forward Catherine Burrell made a steal near the red line and distributed the assist.

Liberty outshot Grand Valley 41-18, but the Lakers did have a few high-percentage scoring opportunities, including one by forward Alisha Day early in the third period.

He has not decided who he will start between the pipes for Friday's third and final round of pool play, when the Lady Flames will face No. 4 Massachusetts, a team that Liberty swept, Oct. 3-4 at the LaHaye Ice Center, to rise from No. 3 to No. 2 in the ACHA DI Poll, replacing the Minutewomen. UMass won all three meetings with the Lady Flames last season, including by a 2-1 count in the first round of the National Championships hosted by Delaware.

Game time is scheduled for 6:15 p.m. and fans can listen to the live action or receive Twitter updates by following @ACHAwomensD1.