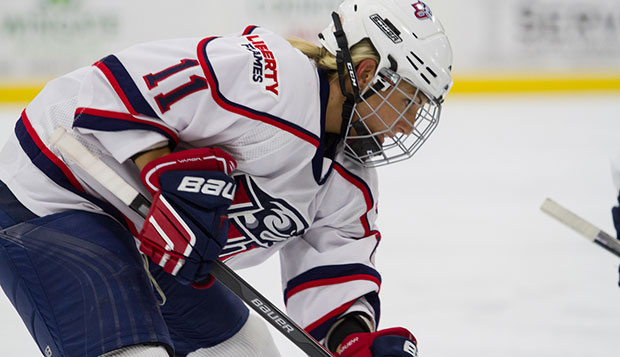 For the second time in three meetings this season, Liberty University's ACHA Division I women's hockey team needed overtime to get past Penn State University, Wednesday night in the first round of the National Championships at York (Pa.) Ice Arena.

Senior forward Sarah Stevenson scored two goals, including the game-winner off an assist from Carrie Jickling with just 37 seconds left in the five-minute extra period, to lift the second-seeded Lady Flames (27-4-1) to a 4-3 victory.

"It was brutal," Liberty Head Coach Paul Bloomfield said. "Down two goals, the girls never quit. Sarah played a really good game. She led the team and played her heart out tonight. Whenever she was on the ice, she was working really hard, chasing the puck. She's probably one of the fastest skaters in the league, and certainly was the fastest one on the ice tonight."

It was Liberty's third one-goal win this season over the seventh-seeded Nittany Lions (17-8), who moved up from the ACHA DII level this season after their DI team transitioned to the NCAA DI level.

"They're a good team," Bloomfield said. "They're big and had a couple girls we had to keep our eyes on."

Forward Claire Gauthier extended PSU's lead to 3-1 before Stevenson pulled the Lady Flames back within 3-2 with 1:25 left in the second period off assists from junior forward Catherine Burrell and Tipping.

"There was a scrum near center ice," Bloomfield said. "She picked the puck up and caught them doing a line change and went in and got a clean shot."

The Lady Flames, who outshot Penn State 41-19 for the game, managed only two shots to PSU's one in the overtime period. But after changing up their lines at the end of regulation, they dominated time of possession before Stevenson finally capitalized.

"A pass came up from behind their net and Carrie (Jickling) got a shot," Bloomfield said. "Their goalie went down to save it and the rebound came out to Stevenson. It was just laying there and she put it in the bag."

Other than her assist, Jickling, the Lady Flames' points leader on the season (33G, 21A), was shut out along with fellow senior forward and second-leading goal-scorer Amanda Grainger.

"Carrie played well, but they were double-teaming her and were all over Amanda," Bloomfield said. "Neither one of them had a chance to breathe, but that left other players open."

Despite the physical action, only two penalties were called on each team on the night.

The Lady Flames will take on No. 6 Grand Valley State in Thursday's second round of pool play, starting at 6:45 p.m. The top two teams out of four in each pool (Liberty faces No. 4 Massachusetts on Friday) will advance to Saturday's semifinals.

Listen to the live action or receive Twitter updates by following @ACHAwomensD1.