Brackets for NCWA Championships will be set tonight 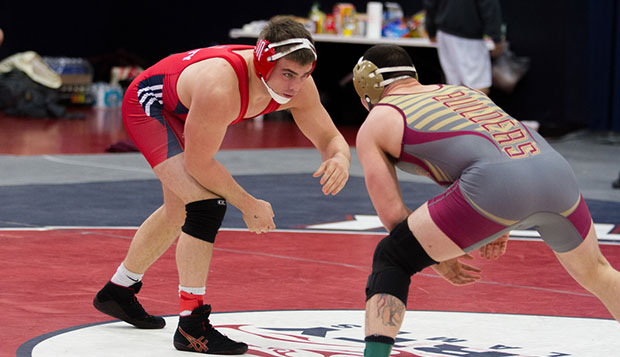 Liberty senior 165-pound wrestler Chase Boontjer, who defended his Mid-Atlantic Conference tournament title this past Saturday at home, is one of 17 Flames who will compete in next week's NCWA National Championships in Allen, Texas.

The National Collegiate Wrestling Association will determine the brackets for next week's NCWA Championships in Allen, Texas, live on Wednesday night in a unique lottery pairing system webcast live at 7:30 p.m.

The league's coaches approved the process for the top 16 seeds to be placed in their normal positions within each weight class, based on each wrestler's conference tournament placing. NCWA staffers will be filling in the remainder of the brackets with a random draw similar to televised lottery drawings. The wrestlers' names in each class will be drawn at random, and their position in the bracket will then be determined by a lottery ball drop that has corresponding numbers indicating where to place them in the bracket.

"To our knowledge, this is the first time that any collegiate association in any sport has used a random draw to determine any part of its national tournament brackets," said Scott Farrell, the NCWA's sports information director. "We will start at 125 (pounds) and go until we are done (at heavyweight)."

The NCWA National Championships are set for March 12-14 at the Allen Event Center. Liberty University, which placed third as a team at nationals in 2013 and was runner-up last year, is ranked first in the nation and takes 24 team points into the tournament after capturing its second NCWA National Duals title, Jan. 24 in Dalton, Ga.