No. 2 Lady Flames open ACHA DI Nationals versus No. 7 PSU 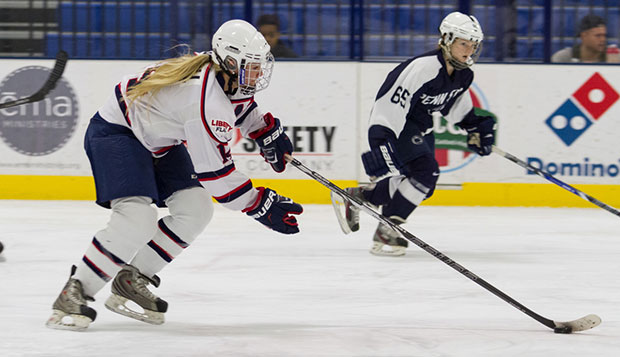 After banging on the door over the past three seasons, finishing fifth, second, and third, respectively, in the ACHA Division I tournament, Liberty University's women's hockey team believes this is the year it will raise the National Championship trophy at the York (Pa.) Ice Arena. Loaded with eight seniors, most of whom factored into those top-five showings, the Lady Flames (26-4-1) have the experience needed to claim the first title in the history of Liberty's hockey program, at any level.

Seeded second behind defending national champion Miami of Ohio (26-2-1) in the eight-team tournament, the Lady Flames will face No. 7 Penn State (17-7) in Wednesday's opener at 6:15 p.m. Liberty won two one-goal games against the Nittany Lions, Dec. 5-6 at the LaHaye Ice Center.

"I'm happy with the pool we're in," Liberty Head Coach Paul Bloomfield said. "None of the games are going to be a walk in the park, though. Penn State's a big team and they're well coached, and the same is the case with Grand Valley State. We'll deal with one team at a time, one period at a time."

"They've got their work to do and we've got our work to do," Bloomfield said of the RedHawks (26-2-1), who swept Liberty in defensive duels, Nov. 21-22 in Oxford, Ohio. "I'm anticipating a good tournament. I think they're ready to take care of business."

The top two teams in each pool advance to Saturday afternoon's Final Four before the championship game is played Sunday at 1 p.m. Complete brackets are available online and fans can listen live to the action and receive updates on game results through Twitter by following @achawomensD1.

One of the first tie-breakers goes to the team with the highest goal differential so the Lady Flames can benefit from running up the score in pool play, as they did in their six-game regular-season-ending shutout streak when they netted 60 goals on their opponents (10.0 per contest).

"Every time we put one in the net, it's going to help us," Bloomfield said.

For the season, Liberty outscored its opponents 161-32.

The Lady Flames feature senior leadership at all three positions — in goal with Chantal Lischynski and Sam Rupp, on defense with Madison Fischer and Autumn Kucharczyk, and at forward with Sarah Stevenson (16G, 33A) and Jenny MacArthur (17G, 21A), the team's second- and third-leading scorers behind junior Carrie Jickling (33G, 20A).

Lischynski and Rupp started most of the games in the 2012 and 2013 national tournaments, respectively. Last season, Lischynski, backed up by current junior Kristina Toppazzini, was named to the ACHA DI All-Tournament first team. This week, all three could see action, "whoever's at the top of their game," Bloomfield said.

"We're all healthy, which helps us," he added. "The girls are in pretty good shape. Between games and practices, they've been on the ice at least five or six days a week and most of the girls are in the gym about every day, so everybody's heading in the right direction."