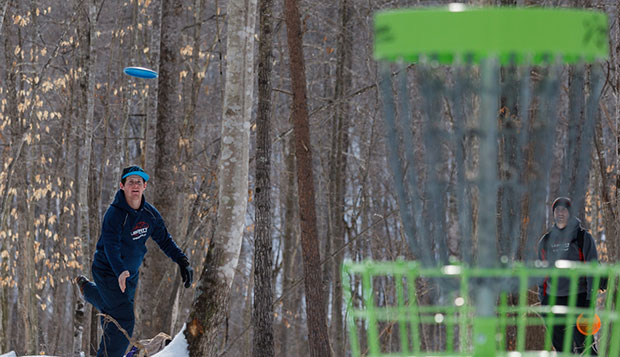 Snow-covered courses and cold and rainy weather made for challenging playing conditions for the 32 players who participated in Liberty University's fourth annual Flamethrower Invitational disc golf tournament over the weekend.

"Everybody liked the new course," Flames Head Coach Steve Bowman said. "It's been fun, in spite of the weather."

Liberty senior Lance Brown, who missed last year's tournament with a spiral fracture in his wrist, was the singles low scorer after posting a low score of 61 on the new course on Saturday and an even-par 60 on the East Campus course on Sunday.

"I've had a lot of experience actually, playing in rain and snow, so that helped a lot," Brown said. "That was the first time we've played the other course, so we don't yet have an idea of what a good round would be. Overall, it's more difficult. Six or seven of the back nine holes go straight up a hill and then straight down."

The Tar Heels' Austin Vegas won Saturday's long-drive competition before Prudich sealed Sunday's putting competition with impressive semifinal and championship rounds in which he sank five and six putts, respectively, out of 10 shots from 25 feet.

Since ETSU, the runner-up Flames, who captured the Second Flight championship in a deluge at nationals last year, and third-place Wolfpack had already clinched team entries to the April 15-18 National Collegiate Disc Golf Championships in North Augusta, S.C., UNC and West Virginia received the tournament's two qualifying bids with their sixth- and seventh-place showings.