Three for the show: Hockey teams bound for ACHA Nationals 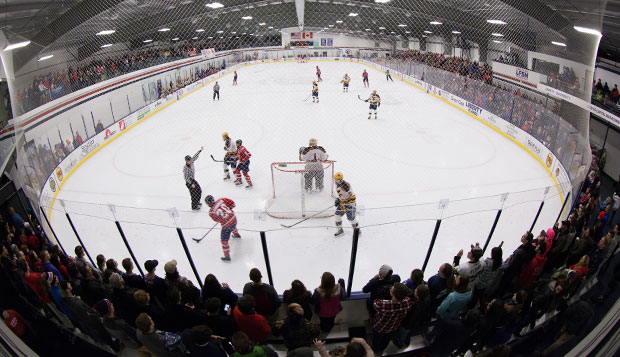 Liberty's hockey teams have played their last games of the season in the LaHaye Ice Center, due for an offseason expansion, but their DI women and DI men will open play in the ACHA National Championships this week in York, Pa., and Strongsville, Ohio, before the DII men travel to Salt Lake City.

For the second year in a row and the second time in the history of Liberty University's Club Sports program, Liberty is sending three of its five hockey teams to this month's ACHA National Championships.

This is the fourth year in a row that both the Division I men's and women's programs earned national bids to this week's tournaments at OBM Arena in Strongsville, Ohio, and the York (Pa.) Ice Arena, respectively. Both seem to be peaking at the right time, as the men — ranked 11th in the final regular-season ACHA DI poll — are riding their second four-game win streak of the season into Saturday's 10 a.m. first-round matchup against No. 6 Ohio (26-10-2).

The Flames (25-11-4) concluded the regular season by sweeping No. 3-ranked Minot State, Feb. 20-21 at the LaHaye Ice Center. If both Liberty and the 2013 national champion Beavers (28-10) win their first-round matchups, they will meet in Sunday's second round, also starting at 10 a.m. The Flames feature the second- and third-leading scorers in ACHA DI: freshman forward Luke Hannon (35 goals, 40 assists) and senior Lindsay LeBlanc (16 goals, league-high 50 assists).

Meanwhile, the Lady Flames (26-4-1) have won seven straight games, including the past six by shutout — outscoring opponents by a staggering 60-0 count. Liberty, seeded second behind defending national champion Miami of Ohio (26-2-1) in the eight-team DI women's field, will face No. 7 Penn State (17-7) in Wednesday's opener at 6:15 p.m. before taking on No. 5 Grand Valley State (16-8-3) on Thursday at 6:45 p.m. and No. 4 Massachusetts (24-6) on Friday at 6:15 p.m. The Lady Flames feature eight seniors, including second- and third-leading scorers Sarah Stevenson (16G, 33A) and Jenny MacArthur (17G, 21A). The team advanced to the championship game for the first time in 2013, when they finished national runner-up to Minnesota. They placed third last year.

Liberty's Division II men's team clinched its second consecutive ACHA DII National Championships berth by defeating Ohio and third-seeded Penn State University in this past weekend's Southeast Region tournament. The Flames (18-10-1) earned a trip to the March 20-24 tournament at the Salt Lake City Sports Complex, the official training venue for the 2002 Winter Olympics. There they will face at least two of the three teams in their pool last season — Grand Valley State (24-6-2), the top seed in the Central Region and the team they upset in overtime in the opener last year, and Northern Arizona (25-8-2), the No. 2 seed of the West Region.

The DI men's national championships will be webcast live by www.fasthockey.com. For game results, visit the respective team pages or follow the Twitter feeds on the Club Sports website or go to the ACHA DI men's, DI women's, or DII men's tournament sites.