Flames second at UNCW as Streeter takes third in All-Around 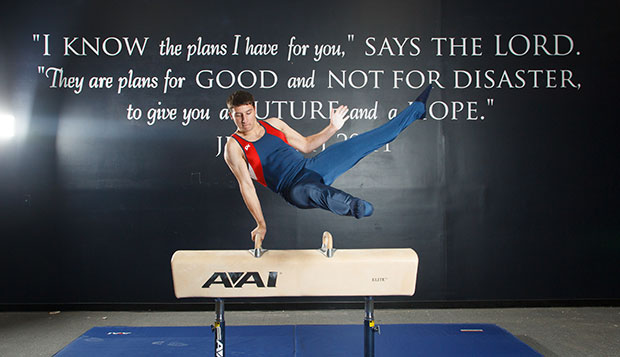 Flames freshman Cameron Streeter placed third on the pommel horse and first on the parallel bars, vault, and floor exercise.

The Flames, who had their competition at UNC Chapel Hill on Feb. 21 snowed out, traveled to UNCW in place of a canceled meet at Clemson. The men's team finished runner-up to Virginia Tech in a field that also included Emory University, James Madison University, Navy, North Carolina State, and the host Seahawks.

As he did at a meet held at JMU on Feb. 7, freshman Cameron Streeter captured third place in the All-Around. He finished first in the floor exercise, parallel bars, and vault as well as taking third on the pommel horse,

For the Lady Flames, sophomore Jessie Hogue's second-place showing on the vault and senior Alyssa Frost's second-place performance on the floor exercise were highlights along with sophomore Ashley Grim's third-place finish on the balance beam.

Saturday's meet was Liberty's last before hosting teams from JMU, American, Temple, Salisbury, and a Liberty alumni team at an invitational in its newly renovated facility at The Plaza in Lynchburg on March 21.

That will be both the men's and women's teams' final preparation in competition before traveling to the April 8-11 NAIGC national championships at the Pennsylvania Convention Center in Philadelphia.