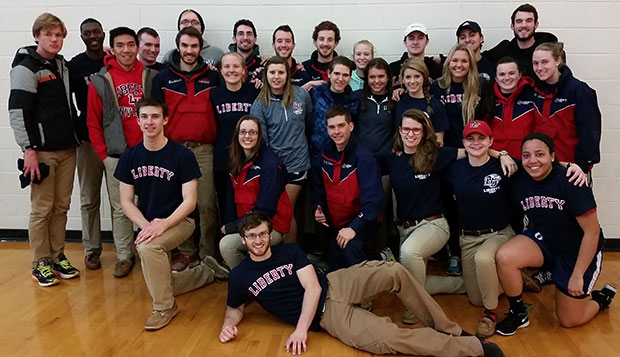 It was a record-setting day for Liberty University's men's and women's crew teams at Saturday's indoor Colonial Erg Sprints, hosted by the College of William & Mary in Williamsburg, Va.

"This was an excellent race for our team," Flames Head Coach Sarah Morris said. "We had 17 out of 25 rowers get personal records on their 2,000-meter races, which is great to see so early in the season. (Assistant Coach) Mitchell (Dieudonne) and I are extremely proud of them all."

A highlight of the competition was freshman Trevor Quandt's first-place finish and Liberty Novice Lightweight 2,000-meter record time of 6 minutes, 49.4 seconds in only his second race of that distance.

"He did extremely well," Morris said. "Mitchell and I were very impressed with his time and are looking forward to seeing what he can do moving forward."

"Carolyn in particular has had an amazing semester," Morris said. "She is really showing what it is to be a Varsity Woman by always improving herself."

Liberty junior Rachel Williams came in second in the Varsity Lightweight women's 2,000 in 8:18.3, behind only Mary Washington's Samantha Lancke who won the four-boat race in 8:07.1.

"We've never had so many novice men with sub-7 minute times so it is exciting to see that our team is growing early on in their careers," Morris said.

Sophomore Kevin Brown finished sixth in the Varsity Lightweight Men's 2,000 in 7:06.8, just a tenth of a second behind the fifth-place rower.

"Kevin fought extremely hard all the way through the race," Morris said. "It was exciting to watch as it was stroke for stroke fighting for that spot the entire race."

Finally, in the Partner Men's 10,000-meter event, Brown and Prescott teamed up for a second-place time of 35:06.8 behind only the host Tribe's tandem of Adam Mullet and Brendan Sawyer, while Herts and Childs finished fifth out of 10 teams in 36:54.4.

In the Partner Women's 10K, Martin and fellow sophomore Emily Berguson placed seventh in 43:00 followed by Williams and Nascimento's eighth-place showing in 45:13.7.

"The team is really pushing forward well and we are excited to see what they do on the water over spring break, March 7-14 at Camp Bob Cooper in Summerton, S.C." Morris said.