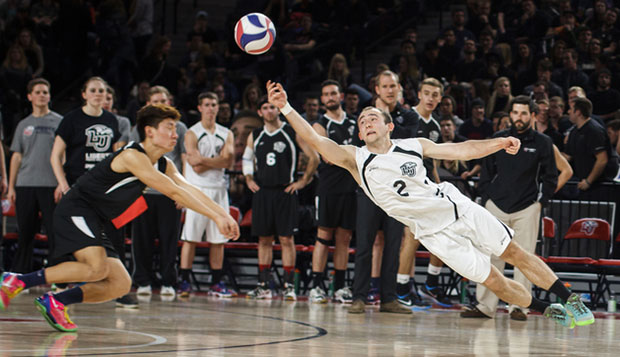 Liberty junior libero Josiah Williams makes a diving dig attempt during the Flames' Spike at Midnight match against Rutgers in the Vines Center.

After going 1-3 on the first day of the Hoosier-Illini Classic, Liberty University's men's volleyball team bounced back to win its first three single-elimination matches on Sunday at Indiana University to advance to the championship of the Silver Bracket.

"We had a bad day," Liberty Head Coach Bryan Rigg said, noting freshman setter Nick Williamson sprained his ankle in the first match and sat out the remainder of the tournament. "We just got Si (Hershberger) back off of an ankle injury. We got off to a slow start and it definitely was not some of our best volleyball. We were struggling. A lot of things were working against us and we beat ourselves."

Although the Wolverines pulled out a 25-18, 18-25, 15-12 victory, Liberty showed it could compete with some of the top teams in the nation. Complete results are available online.

"We were able to regroup and salvage the weekend," Rigg said. "The team sort of rallied around and made the best of a tough situation. It was a good trip and great experience for us. At the end of the day, we took some confidence from the tournament. We're still not where we want to be, but it was good for us to see that we have the talent to compete with almost every team that was there."

"I suspect they'll go up to No. 1 in the national rankings," Rigg said of the EIVA South rival Hokies.

Since senior Ethan Chase, who set for Liberty last season, did not make the trip, junior Isaac Zywczok, the Flames' setter as a freshman, filled in for the injured Williamson.

"He was one of the key reasons we were able to salvage the weekend," Rigg said. "He picked up the slack and did a good job of filling in. It was good to give us the opportunity to prepare for a situation that might happen again in the future. Someone else might get injured and we have to be able to adjust."

Graduate student Kevin Snyder led the Flames in kills while middle hitters Luke Werth and Sam Eisbrenner more than held their own in hitting and blocking. Junior libero Josiah Williams played solid as usual on the back row, complemented by freshman defensive specialist Sam Wyman.

"He played on most of our service-receive points and brought a cool calm to the game," Rigg said of Wyman. "He was able to settle our defense down and keep us rolling."

The Flames have three weeks to prepare for the EIVA South Championships on March 21, when they will try to qualify for the East Coast Championships to improve their seeding for the April 9-11 NCVF Collegiate Club Championships in Kansas City, Mo.