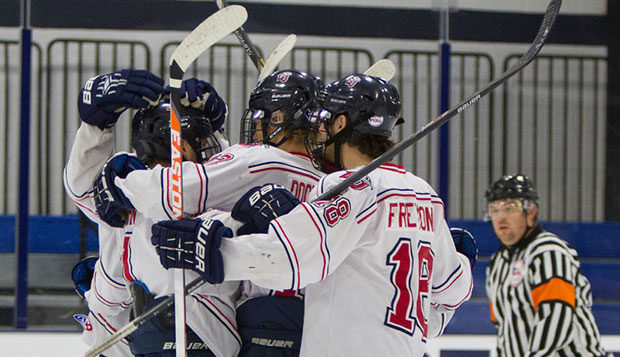 The sixth-seeded Flames let a three-goal lead slip away in the third period before sophomore forward Ryan Bray scored the game-winner in the opening 75 seconds of sudden-death overtime off assists from junior forward Peter Kazmierczak and senior forward Caleb Grow.

"There was a mad scramble around the net and we put one off the post and our guys celebrated, thinking it was in," Liberty Head Coach Chris Lowes said. "Then Kaz(mierczak) put a shot on net and Bray got the rebound and put it in and our bench just cleared.

"Penn State wasn't too happy about it because they thought play should have been stopped, but our guys battled through to the whistle and were happy to take the win."

With the victory, the Flames (18-10-1) secured a return trip to the ACHA DII National Championships, set for March 20-22 at the Salt Lake City Sports Complex, the official training venue for the 2002 Winter Olympics. Penn State (25-3), meanwhile, is eliminated from postseason play after qualifying for at least the past four national tournaments in a row

"We played a pretty simple game but our guys had a sense of urgency," Lowes said. "I would say it was an emotional rollercoaster for our guys. We came out flying and we played about as well as we could imagine in the first two periods. To see it all go away there in the final three minutes was a little daunting."

Liberty opened a 2-0 first-period advantage on goals by sophomore defenseman Ryan Sidun, who redirected a fortuitous bounce in front of the Nittany Lions' net, and junior forward Paul Ingles on a bang-bang play off an assist from Sidun. The Flames extended their lead to 4-1 by the end of the second before giving up three unanswered goals in the third.

"Our third goal came on a scramble in front of the net," Lowes said. "Ingles, (sophomore forwards Ben) Freymond and (Devin) Docks(steader) were all grinding and pushing and it was a scramble across the goal line."

Then, with 3:43 left in the second period, Ingles completed his hat trick and pushed Liberty's lead to 4-0 with a shorthanded goal before Penn State finally got on the scoreboard 45 seconds later, capitalizing on the same power play.

The Nittany Lions cut the deficit to 4-2 with 10:47 left in the third period before knotting the score at 4-4 by capitalizing on back-to-back man advantages in a span of 23 seconds, the last with 2:47 left in regulation.

"Essentially, they scored three power play goals," Lowes said. "We knew their power play was that strong. Five on five, we played really good hockey. Our strength is using our depth, using our lines, playing 12 forwards and six defenders in five on five."

Penn State outshot Liberty 37-33 for the game but senior goalie Blair Bennett made 33 saves for the Flames.

"I was proud of our guys," Lowes said. "It was daunting to have to take on Penn State, but our guys really stepped up to the plate. They came out on fire and didn't let (PSU's late comeback) get them down. They brought a lot of energy we didn't see in the third period into overtime."

The Nittany Lions would have joined top-ranked Florida Gulf Coast University as the second team from the region to receive an autobid to nationals, but slipped to the third seed behind Miami of Ohio after being upset by Rider in the first round of the Mid-Atlantic Collegiate Hockey (MACH) playoffs.

As the No. 4 seed out of the Southeast, Liberty will be in a nearly identical pool as last year for the national tournament, with Grand Valley State the No. 1 team out of the Central Region and Northern Arizona the No. 2 seed from the West. The No. 3 seed from the Northeast has yet to be determined.

Last year near Boston, the Flames upset GVSU in overtime in the opener before missing an opportunity to advance to the Final Four by losing to eventual national champion New Hampshire, the No. 3 seed out of the Northeast, in the third game of pool play.