Liberty set to test its new course at Flamethrower Invitational 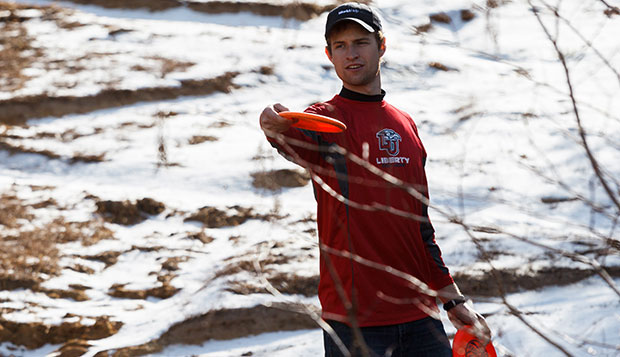 Liberty senior Justin Towns prepares to take a shot in practice on the Flames' snow-covered course.

After many months of planning and development, Liberty University's disc golf team will test out its new 20-hole course, located on Liberty Mountain, during the first day this weekend's fourth annual Flamethrower Invitational. Though snow may still be on the ground, the Flames will seek to defend their title on their home course for a third time. Sunday's second day of the event will be played on the East Campus course that opened in 2012 and has since been altered by construction projects.

Though not quite as difficult, the new layout is even longer than the original, spanning more than three miles — even without including the yet-to-be finished seven-hole introductory course near Camp Hydaway.

"There's still some elevation change, but nothing like what we have on the (East Campus) course, which has a lot more hill terrain," Liberty Head Coach Steve Bowman said. "There are not many 27-hole courses on the East Coast and this is one of the biggest in the area."

Though not as easily accessible as the East Campus course, it is actually not far from the NCAA golf program's four-hole course, driving range, and new clubhouse. Students can get there by taking the bus route that leaves from main campus with stops at the Liberty Mountain Snowflex Centre, the Equestrian Center, and Camp Hydaway. A wilderness experience awaits those who venture to try the course, which meanders through the woods and along some streams and creeks and around the Hydaway Lake area near the campground. The course parallels and utilizes some of the existing hiking and mountain biking trails out there, in some cases as a means to get from one hole to the next.

"It took us about three months to lay it out, to get permission from environmental groups to make sure it's going to fit in with the flow (of the natural area)," Bowman said. "The mountain crew did a phenomenal job to prep the course, cleaning and grooming the whole mountain side and course side to make nice, smooth fairways by blazing a trail and pushing (obstacles) out of the way."

Each hole will have three tee pads and basket locations of varying distance and difficulty. Beginning players will use the red tee pads, intermediate and collegiate men and women will play from the white tees, and advanced players will start from the back blue pads.

"It's a challenging course, but it will be fun, something you can play quick after you get off the bus," Bowman said. "Anybody traveling through will have a tremendous experience and walk away going, ‘That's a really fun course.' It's something that's really going to be a benefit to disc golf in the area and the collegiate team. We're excited about it."

Competition starts at 9 a.m. Saturday on Liberty Mountain and Sunday on East Campus, with singles and doubles play both days.