Leeds serves as ambassador for Liberty and Christ in Europe 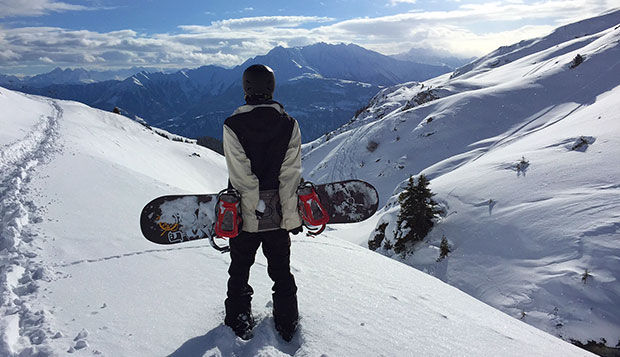 Liberty men's and women's ski and snowboard Head Coach Ryan Leeds takes in the view from LAAX Mountain in Switzerland, his first stop on a European tour with Skiers and Snowboarders for Christ international director Josh Stock.

"It was cool to be an ambassador for Liberty on that trip, and to be an example for my team to be witnesses for the Gospel, which is hard to tell them to do if I'm not doing it myself," said Leeds, who started his tour at Switzerland's LAAX, one of Europe's premier freestyle resorts. "A lot of the (Flames) are jealous that I got to go on a trip to Switzerland because LAAX is a dream mountain for many of them. God was opening up doors for me and not just to concentrate on myself and have fun, but to go out and glorify God with my snowboarding and tell others about Jesus, because that's what I've been called to do."

SFC started in New Zealand in 1997, branched out to England and North America in the early 2000s, and now has 38 chapters in the United States, including one based at Liberty Mountain Snowflex Centre (LMSC) that Leeds helped start in 2011. According to its website, SFC USA exists to bridge the ski and snowboard culture to Jesus, partnering with the local church.

He has handed off leadership responsibilities of the chapter to senior teammates Austin Herrero and Chris Holt, who hold Thursday night Bible studies in Snowflex's Barrick-Falwell Lodge and more recently at Wintergreen Resort, where the Flames have season passes.

"Ryan oversees everything and he's sort of discipling us," Herrero said. "But Chris and I are the ones who are really forming relationships and making things happen and it's been a great blessing to do that."

Herrero, whose father, Ralf, died less than two years ago, recently moved with his mother Gretchen and sister Hayley from Florida — where his father was an avid surfer — to the skiing community of Steamboat Springs, Colorado, fulfilling his dad's dream.

"Those guys are my family, so it's been great," Herrero said. "They were there for me and we just kind of bonded as brothers."

Co-leading the local SFC chapter with Holt has challenged him to share his testimony and witness.

"It's definitely been a way for me to really outreach and really work out my faith," Herrero said. "It's been a great opportunity to disciple some guys. It's really cool, the opportunities that come up. The scoreboard and ski culture are really dark cultures and the light is needed there. It's a mission field, for sure."

Stock, who visited LMSC for its grand opening in 2009 and for a few of its Next Level summer camps, lives in Colorado and served as SFC's USA national director for 10 years, starting in 2004. The purpose of his six-week tour through Europe was to create connections and build relationships with directors of new SFC chapters, while sharing the ministry's vision of being the light of Christ in the ski and snowboard culture.

Leeds was hired as the Flames' Head Coach in August of 2013, soon after returning from Australia and New Zealand, where he partnered with SFC's established chapters' on-slope ministry efforts. He joined Stock on his European tour to support the leaders of newly organized SFC chapters.

"We want to encourage the leaders to keep up the work and reach people," Leeds said. "If you're selfless in a selfish industry, you're going to stick out."

Leeds saw a great need for Christ-centered ministry in the four European countries he visited. He explained that many Europeans are not interested in matters of faith.

"Skiing and snowboarding communities provide an awesome opportunity to reach people who otherwise wouldn't step into a church."

He was amazed at how unified the pastors, SFC leaders, and riders he met there were in serving the body of believers and fulfilling the Great Commission, reaching others for Christ.

"In America, one of the biggest obstacles (in witnessing to unsaved skiers and snowboarders) is they see the church as being hypocritical, and there's not agreement or unity between denominations," Leeds said. "That's why I feel God is going to be doing some pretty big things in Europe in the next couple years. All the churches and the pastors in Europe gather together and talk about reaching their communities. The kids are interested in breaking down barriers and serving, and people, once they see that, will be a little more open and receptive."

Leeds would love to take Liberty's entire team on a mission trip to Europe to see first-hand God's Spirit at work through SFC.

"In working with people involved (in SFC), you really realize how unifying the Gospel is and how powerful it is," he said. "It overcomes boundaries and territories, language barriers, denominational barriers, and unifies the body."

He said it would be good for the team, which is preparing for next week's United States Collegiate Ski and Snowboard Association (USCSA) National Championships in Bend, Oregon, to have the opportunity to travel without the pressure of performing.

"Obviously, we want to glorify God with our athletic ability and we want to win competitions for the school," Leeds said. "But we also want to be obedient to God's mission for us. We encourage team members to be really bold in the witnessing at the resorts we get to visit. You can learn a lot when you go to a mountain without an agenda. If we go on a mission trip, the focus can be on being a light on a hill."