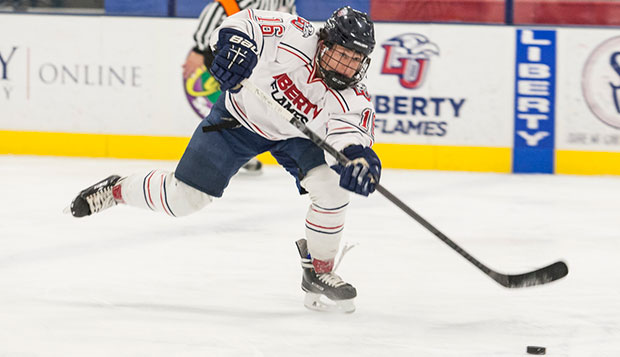 With a return trip to the ACHA Division II National Championships on the line, Liberty University's DII men's hockey team has a sense of urgency for this weekend's Southeast Region tournament, held at the Warwick Twin Rinks outside of Philadelphia.

One week before Liberty's 11th-ranked Division I squad challenges sixth-seeded Ohio in the second round of the ACHA DI National Championships near Cleveland, the sixth-seeded DII Flames (16-10-1) will meet the No. 7 DII Bobcats (19-8-4-1) in Saturday's final Southeast regional first-round game, set for 5 p.m.

Liberty split a series with Ohio on Oct. 4-5 at the LaHaye Ice Center, winning the opener 12-3 before rallying from a 3-0 deficit to tie the rematch at 4-4 early in the third period of a 6-4 setback.

"I believe it's their first-ever trip to regionals and we expect a great game," Flames Head Coach Chris Lowes said. "They were ranked as high as No. 4 this year and they have a lot of talent. They have a good program at all levels and their DII team has exploded the last couple years. They're what we were six or seven years ago, just starting to turn heads and gain respect in our region."

The tournament field includes the third- through 10th-ranked teams in the region, with top-ranked Florida Gulf Coast University and No. 2 Miami of Ohio receiving automatic berths into the March 20-24 ACHA DII National Championships in Salt Lake City, Utah.

There will be no regional tournament champion crowned this weekend. In an extremely balanced field, the two teams that win both of their games will receive the last two national bids.

"If we get the win (against Ohio), we could play nearly any other team on Day 2," Lowes said. "It's so wide open. If you look at the teams ranked at No. 9 and 10, Rider and Virginia Tech, I don't think anyone would be shocked to see them make it to the second day."

He said No. 8 Delaware — which defeated Liberty in the second round of the Mid-Atlantic Conference Hockey tournament on Feb. 14 before going on to win that event, which also featured this weekend's third- and fifth-seeded teams — is another example of a low seed that could stage an upset or two.

After Saturday's first round, the teams will be reseeded for Sunday's second-round games, set for 11 a.m. and 2 p.m., with the winners advancing to nationals. If there are no upsets, Liberty would be pitted against No. 3-seeded Penn State, which plays Delaware in the first round. Toledo and Rowan are the Nos. 4 and 5 seeds and will take on Virginia Tech and Rider, respectively, in Saturday's openers.

Last season, Liberty qualified for the ACHA DII national tournament for the first time since 2006 and nearly advanced to the Final Four, falling to eventual champion New Hampshire in its final game of pool play.