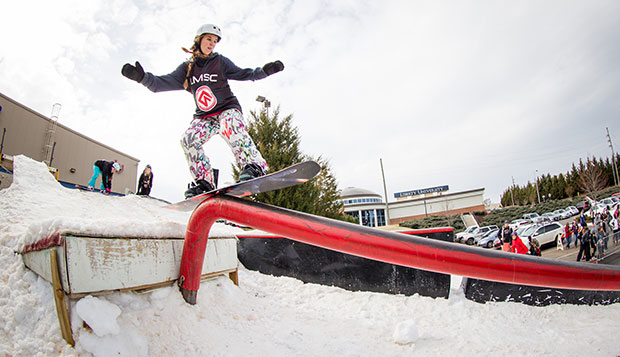 Sydney Beatty, who placed second at the LaHaye Rail Jam during College For A Weekend on Feb. 14, won Saturday's USCSA Southeast Regional slopestyle event at Wintergreen.

Hoff scored a 41.5 and Ducharme recorded a 37.5 on their only runs to pace the Flames to a team championship.

"It was very windy with a lot of snow and very low visibility so (coaches) from all the different schools voted for it to be just a one-run slopestyle competition," Leeds said. "Uphill winds contributed to slower runs and there was fresh powder on top of everything, so it was very similar to nationals last year."

Most of Liberty's nine men and three women snowboarders made the best of their single runs, with the men taking five of the top eight places out of 40 contestants and the Lady Flames' trio of sophomore Sydney Beatty (15.5 points), senior Brooke Gibson (11.5), and junior Brandy Fronte (7.5) finishing first, third, and sixth, respectively, out of 15 riders.

"It turned out well," Leeds said. "Everybody we normally compete against was there and we had a couple good runs I saw that made me pretty confident we would take first overall."

There was little pressure on the Flames and Lady Flames, who swept the USCSA Southeast regular-season team points titles, to make the cut for nationals, set for March 1-7 at Mt. Bachelor in Bend, Ore.

"You just have to drop (begin a run) in a freestyle event in order to qualify," Leeds said. "We mainly wanted everyone to stay healthy so they can compete at nationals."

Leeds said the Flames, who fly out on Saturday and will have four days to prepare for their first event, are shooting for a first- or second-place team showing in snowboard slopestyle out in Oregon.

"We want them to do well individually, but our focus is on our performance as a team," he said. "We're not out there to see Bryan Ducharme or Kevin Hoff win nationals. We're trying to get our team to win nationals. If we can get all of our riders at a very close ability level, that will increase our score."

Having multiple freestyle events to enter will improve the team's chances of placing highly in one or more.

"At regionals, we just competed in slopestyle," Leeds said. "When we go to nationals, there will be Rail Jam, slopestyle, and boardercross events."

Liberty's men placed second in the Rail Jam and fourth in slopestyle at last year's nationals and won both boardercross races it entered earlier this month.