Restoration of program to current status was a 'God thing' 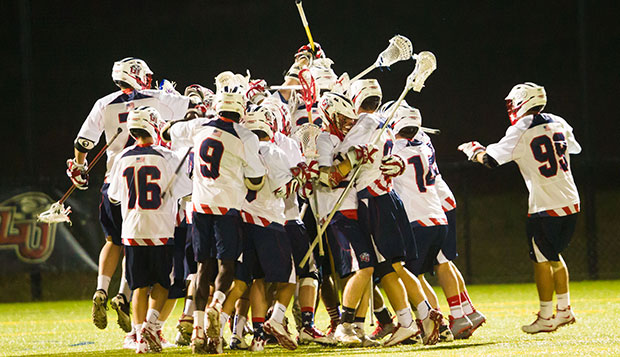 The Flames celebrate clinching the SELC Northwest Region regular-season crown with a victory over Virginia Tech on April 18, 2014, at the Liberty Lacrosse Field.

This week, the Flames rose four spots to No. 14 in the MCLA DI poll, their highest ranking to date at that level.

The team's recent resurgence is a byproduct of the program's roots, which run so deep in Liberty history. Long before the existence of the university's Club Sports program, a student-run lacrosse team operated independently of administration.

Despite its unofficial status, the team thrived. Fifth-year Flames Head Coach Kyle McQuillan played with the program back in those days.

"It was absolutely the definition of a student-run program," McQuillan remembered.

The players appointed team presidents and captains amongst themselves, serving as coaches and liaisons between the team and school. They pooled money for dues, shared equipment and scrounged for available fields and facilities.

It wasn't ideal, but it worked.

"We were definitely a competitive team back when I played," McQuillan said. "The level of success and amount of talent we had I thought was pretty good. We were able to pull guys from a lot of different parts of the country. Every once in a while we'd be able to pull a couple of really good players, but at the end of the day, we were just a bunch of guys who were great athletes and had some lacrosse background as well."

The boys banded together to go .500 or better almost every season they played, their achievements and reputation growing year by year.

In 2005, the Flames scheduled a series of spring break road games. They loaded into two 15-passenger vans, and beginning in Savannah, Georgia, prepared to play their way across the Southern states.

The trip was a big event for the team, featuring tough games against recognizable opponents with the opportunity to expand Liberty's name as well as garner attention and gain support for the fledgling program.

Rolling down the backcountry roads of Mobile, Alabama after a game against the University of Alabama, though, one van rear-ended the other. The impact from the second vehicle pushed the first into oncoming traffic. A semi-truck crashed into it head-on.

McQuillan, along with others in the second vehicle, rushed to the scene, expecting the worst. Amazingly, all survived, but the damages done — physical, mental, emotional, and material — were extensive.

"To say that it's a miracle nobody died, I stand by," McQuillan said. "I think we all expected to find much worse… but there were a lot of significant injuries, injuries that guys are still dealing with today."

McQuillan remembered Liberty's intervention in the event as a singular bright spot. The school sent a plane down to collect the team and deliver them safely home.

"It was really the first time that I saw the university step in in a big way," McQuillan said. "I was proud to be a part of Liberty University — not that I wasn't beforehand, in any way, but it was such a reassurance. The university came to our aid and really stepped in to show their support and help us through a difficult time, and we were really grateful."

The hurt of the accident (physical and otherwise) still fresh, the remaining half of the roster pulled together and determined to complete that lacrosse season. McQuillan and assistant coach Jessi Glauser, who got involved with the team post-accident, remembered finishing the year in honor of those missing as one of the program's hardest and proudest moments.

A year after it finally ended, though, so too did the program.

According to Glauser, the folding came down not to lack of interest, but lack of commitment.

"About four days before the season was supposed to start, we had about half the team just, well, walk," Glauser remembered.

McQuillan confirmed the account, but didn't blame those who left. The concerns the team and those involved with it had post-wreck were legitimate. Getting back in the vans and carrying on as in previous years was impossible.

Four years after the program was disbanded, a young lacrosse player named Mike Zumpano arrived on a campus visit and made a beeline for the two-year-old Club Sports department office.

Department director Kirk Handy met with the high school senior, who asked about starting — or, in Liberty's case, re-starting — a men's lacrosse program.

Handy told Zumpano he would need sufficient student interest, a league in which to play, an estimate of the expenses, and someone to head it all up.

That was enough for Zumpano. He came to Liberty that fall and, along with a handful of fellow students, gathered all the necessary components by the deadline Club Sports gave him.

By the spring of 2010, all the department needed to launch the program was a coach.

While reaching out to the early program's coaching staff for hiring direction, Handy learned that McQuillan had married straight out of college and was still in Lynchburg, working for Liberty's finance department. He contacted McQuillan, told him about the job, and the former lacrosse captain jumped at the chance.

In its first season of MCLA DII play, the team went 4-4. By its second year, the university provided it with new facilities, including the current field, locker room, and weight room. The Flames' overall record improved to 8-4 and they finished runner-up to eventual SELC champion Elon University.

The next season, hungry for more, Zumpano and the Flames hoisted the SELC championship trophy after an 18-2 season that ended with a Final Four overtime loss to eventual national champion University of St. Thomas.

That prompted the Flames to move up to the MCLA DI level last season, when they finished 15-4 and ranked 21st in the nation, going undefeated at home for the second straight year. Liberty clinched the SELC Northwest Region title with a victory over the same Virginia Tech squad that would later end its season in a tight SELC championship game.

With six ranked opponents, including three in the top 10 and last season's national championship runner-up, this season will be the Flames' toughest by far. Just three days into the season, though, the team is already 2-0 and eager for the challenge.

"I didn't even recognize as a player how much potential (the lacrosse program) had," Zumpano, who graduated last season and now coaches with the team, said. "To see where we are now in comparison to where we started really opens your eyes to how much potential is still there. It only grows bigger … as long and as far as the players want to work for it and embrace that vision, it's going to drive Liberty Lacrosse to more and more success."

From the facilities to the equipment, the level of play to the ability of the individual athletes, Liberty's program has seen an enormous transformation since its early days.

"Liberty has really developed the kind of structure that a lot of big-time teams and big-time programs have produced," said junior midfielder Brett Bernardo, who transferred from an NCAA lacrosse program to play for the Flames in 2013.

Bernardo said he transferred primarily for the Christian atmosphere, but was blown away by the NCAA-quality level of the program. Sophomore attackman Ryan Miller, on pace to become the all-time scoring leader in the MCLA, echoed his statement, saying that he came for the values but stayed for the high-level lacrosse.

Miller, who described the talent the team has accumulated over the years as a "God thing," expressed his appreciation for the family environment.

"When I first visited Liberty, I didn't really know what to expect," Miller said. "I could sense a team atmosphere that I hadn't seen on a lot of other teams … and there's a really strong Christian (presence) here, which is kind of a given but it's taken for granted."

For what started as a ramshackle student-run program, Liberty men's lacrosse has become an SELC powerhouse that rivals NCAA programs. As the Flames forge into the 2015 season looking for their first national championship, the original student captains and presidents can only be proud of how far the team has come in such a short time.